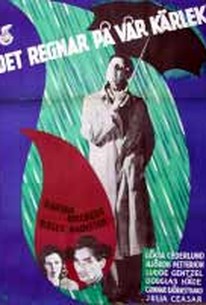 Literally translated, the title of this early Ingmar Bergman effort is It's Raining on Our Love. Though hardly representative of the best that Bergman would have to offer, the film was highly regarded by critics and moviegoers alike when it first appeared in 1947. Put simply, the story theorizes that just because someone commits a criminal act, that someone isn't necessarily a criminal. Barbro Kollberg plays the unfortunate soul whose solitary indiscretion seriously jeopardizes his future happiness. The plot Det Regnar pa Var Karlek is "explained" throughout by an ersatz stage manager, the sort of theatrical device that Bergman would abandon as he became a more self-confident filmmaker. ~ Hal Erickson, Rovi

Gösta Cederlund
as Man with the umbrella

Bergman's second feature is a playful but rather ill-advised blend of rainswept miserablism and laborious whimsy.

Look in this film for the promise of a genius with a bright future, and you're not going to find it.

This is a romantic and exciting feel-good movie about a lovable naive couple with a questionable background, trying to start all over together and adapt themselves to the society. The young star director Ingmar Bergman here effectively portrays typically good and bad sides of the human behaviour. The main theme returns over and over again - how do people live with their past, and how do they handle the resulting conflicts and moral dilemmas? Despite the age of this movie (released in 1946) it does not feel old fashioned in any way. Common to Bergman's movies to come, this one is way ahead of its time. The story and acting feel just as fresh as any modern movie and is a pure enjoyment to watch, without any boring or embarrassing moments.