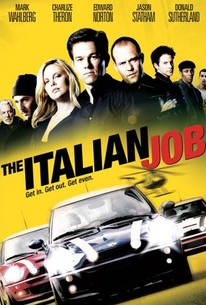 Critics Consensus: Despite some iffy plot elements, The Italian Job succeeds in delivering an entertaining modern take on the original 1969 heist film, thanks to a charismatic cast.

Critics Consensus: Despite some iffy plot elements, The Italian Job succeeds in delivering an entertaining modern take on the original 1969 heist film, thanks to a charismatic cast.

Critic Consensus: Despite some iffy plot elements, The Italian Job succeeds in delivering an entertaining modern take on the original 1969 heist film, thanks to a charismatic cast.

A team of high-class thieves avenge their mentor's death -- with the help of his own daughter -- in this big-budget remake of the 1969 British caper classic. The Italian Job stars Mark Wahlberg as Charlie, the mastermind of a daring Venice heist overseen by John (Donald Sutherland), a lifelong criminal who plans to retire from the fold with the earnings from his most recent take. Basking in the glow of a job well done at a secluded retreat in the Alps, the thieves -- including the aptly-named Handsome Rob (Jason Statham), tech-geek Lyle (Seth Green), and hearing-impaired quipster Left Ear (Mos Def) -- are ruthlessly double-crossed by one of their own, the taciturn, calculating Steve Frezelli (Edward Norton). Time passes and each member of the group finds himself pursuing other opportunities in the States, until Charlie rallies them together for a revenge-motivated scheme designed to bilk Steve of all his misbegotten earnings. In order to cinch the deal, he even enlists John's reluctant safecracking-prodigy daughter, Stella (Charlize Theron), for an elaborate, incognito Los Angeles heist. But the paranoid Steve proves himself to be one step ahead of them at just about every turn, and Charlie finds that he'll have to make some daring last-minute changes to their plan if the team is to succeed. The Italian Job marked director F. Gary Gray's second 2003 release after the Vin Diesel vehicle A Man Apart. ~ Michael Hastings, Rovi

Terrelle Jones
as Kid On Left

Valentine Ebunilo
as Kid On Right

Ryan B. Adams
as Metro Conductor

News & Interviews for The Italian Job

View All The Italian Job News

Critic Reviews for The Italian Job

Exciting heist film for teens and their families.

This one offers some agreeably mindless fun in which the villains (including Norton) are truly villainous, the payback is satisfying in a purely infantile way, and the familiarity of everything is oddly comforting.

Itresembles a film made up on the fly. The cast, too, are strictly cut from comic books. Don't expect any unconventional endings either.

This unglamorous approach has the odd effect of making them seem more glamorous -- we're free to soak up their star quality because there's no hard sell to fight off.

Memories of the 1960s caper classic are obliterated by this pointless remake, which uncomprehendingly salvages a few elements from the original, while behaving as if no one involved cared or liked it much anyway.

It is smart, funny, wellplotted and performed and as slick as a Vaselined eel. If you have to remodel a classic for a new age, this is the way to do it.

It is in Gray's spirited execution that such by-the-book formula makes for a brisk, slick entertainment hits the summer movie spot.

A fun bit of action comedy with a bang up cast.

The Italian Job turns out well, a fast and entertaining caper designed to give you a couple of fun hours.

Gary Gray's version is tauter, better made but insufficiently idiosyncratic to attract a cult following.

Gray adds some zip to this remake of the 1969 Michael Caine caper flick, but despite two clever action sequences and some uncharacteristically tight performances from his cast (most notably Charlize Theron and Mark Wahlberg), the con remains the same.

Audience Reviews for The Italian Job

This exhilarating action-packed movie is quite satisfying for what it intends to be: an exciting, fast-paced fun ride that benefits from a great dose of humor, a fine cast and the beauty of its locations, especially Venice.

Cool and slick, with a decent cast to deliver the goods, this heist caper is less about the steal than about the tension between the characters working the grab. The audience I saw it with audibly gasped when the twist showed up early on.

Remake of the 1969 film, The Italian Job, this film is a good heist film that could have been much better. The film is entertaining, but lacks anything truly great. The heist itself seems all too easy, and personally; I felt that the heist in original film was far more exciting than this. But I felt that this came off a little flat. The film is good, but it's nothing really remarkable. The cast are fun, but to be honest, I really didn't like Edward Norton here; I felt that this was one of his weakest films, and that I thought that the part should have been recast. This film, compared to the original, can be seen as a pure popcorn flick. I felt it lacked the intellectuality of the original, the wit and suspense of the heist and phenomenal, top-notch acting. With this remake, everything is predictable, and they just changed a few things around to make it "thrilling". This remake isn't bad, I was entertained by it, and like it, but compared to the original, and it's not as good. For what it is, this is still an entertaining film; just don't expect anything as great as the original. As far as remakes are concerned, this isn't bad, but it's not great either. This film is just a case of been there done that, but I guess in the end, it's good for a mindless night of excitement, which it does well. The film does have plenty of thrills, although the plot is predictable and we know how it will end. Despite its flaws, I enjoyed it, but I'll stick with the original. If you enjoy heist films, then give this one a shot.