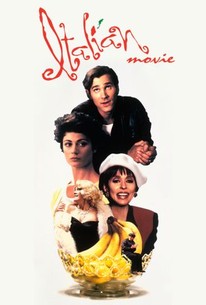 The 1993 made-for-cable feature Italian Movie was released to home video in 2002 due to the presence of actor James Gandolfini from the popular HBO original program The Sopranos. This comedy drama stars Michael Dellafemina as pizzeria owner Leonardo and Caprice Benedetti as his materialistic wife, Anna. Leonardo is a compulsive gambler who tries to make up for his losses by becoming a male escort. Rita Moreno shows up in a cameo as Isabella, Anna's pushy mother. Gandolfini has a bit part as Angelo, a sleazy gangster.

Kim Wall
as not listed
View All

For Gandolfini junkies only.

There are no featured audience reviews yet. Click the link below to see what others say about Italian Movie!