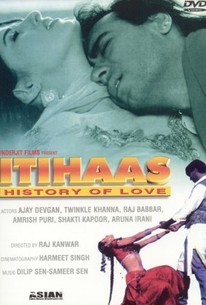 When the fiancée of a wealthy and powerful man falls hopelessly in love with the son of one of her future husband's employees, the forbidden couple is forced to flee to Bombay in fear for their lives. Enraged that his beautiful bride-to-be Naina would fall for simple employee's son Karan, Thakur Digvijay Singh announces a reward for the bounty hunter who succeeds in delivering Karan's head, and bringing Naina back unharmed. Later, when Karan's father shows up in Bombay, the couple is initially relieved before finding out that he is more interested in the handsome payout than a family reunion.

There are no critic reviews yet for Itihaas: History of Love. Keep checking Rotten Tomatoes for updates!

There are no featured reviews for Itihaas: History of Love at this time.