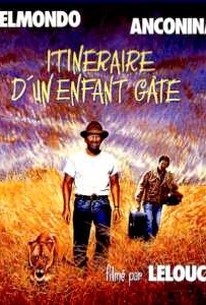 French director Claude Lelouch, of Man and a Woman fame, called the shots on Itineraire D'un Enfant Gate. Jean-Paul Belmondo (who co-produced the film) stars as a powerful international businessman who, in his youth, had been a carnival performer. Once more bitten by wanderlust, Sam Lion (Belmondo) tries to escape his responsibilities by staging his own death. Hiding out in Tanzania, Lion meets Abert Duvivier (Richard Anconina), one of his own employees. Duvivier, informing Lion that the business has gone to hell in a handbasket thanks to the mismanagement of Lion's daughter Victoria (Marie-Sophie Lelouch), begs the executive to return. The literal translation of the film's title is Itinerary of a Spoiled Child.

There are no critic reviews yet for Itinéraire d'un enfant gâté. Keep checking Rotten Tomatoes for updates!

There are no featured reviews for Itinéraire d'un enfant gâté at this time.