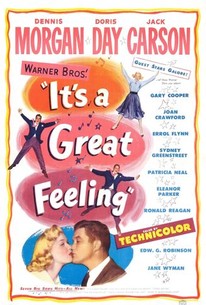 It's a Great Feeling Photos

Billy Wilder's future partner I.A.L. Diamond concocted the storyline for this Dennis Morgan/Jack Carson/Doris Day tunefest. Morgan and Carson, Warner Bros.' answer to Bing Crosby and Bob Hope, appear as themselves. Attempting to line up a director for their next picture, the boys find themselves unable to do so due to Carson's gigantic ego. Carson decides to direct their next vehicle himself; the next problem is locating a leading lady who'll be willing to put up with Carson. The boys discover Doris Day, a waitress in the Warner Bros. commissary. Carson and Morgan spend their entire shooting schedule vying over Day's affections; she gets fed up with this, and heads back to her home town in Wisconsin, there to marry her childhood sweetheart Jeffrey Bushdinkel--who is revealed in the final shot to be none other than Errol Flynn! Other guest stars popping in and out of It's a Great Feeling include Gary Cooper, Joan Crawford, Sidney Greenstreet, Danny Kaye, Patricia Neal, Eleanor Parker, Ronald Reagan, Edward G. Robinson and Jane Wyman. Also appearing as themselves are such Warner Bros. directors as David Butler (the real director of It's a Great Feeling), Michael Curtiz, King Vidor and Raoul Walsh.

Dennis Morgan
as Himself

Jack Carson
as Himself

Joan Crawford
as Herself

Gary Cooper
as Himself

Sydney Greenstreet
as Himself

Danny Kaye
as Himself

Patricia Neal
as Herself

Eleanor Parker
as Herself

Ronald Reagan
as Himself

Edward G. Robinson
as Himself

Jane Wyman
as Herself

David Butler
as Himself

Michael Curtiz
as Himself

King Vidor
as Himself

Raoul Walsh
as Himself

Critic Reviews for It's a Great Feeling

Its A Great Feeling is less than great, but ranks as good entertainment of a painless sort.

Never delivers a great feeling--settling instead for a pleasant one.

Audience Reviews for It's a Great Feeling

There are no featured audience reviews yet. Click the link below to see what others say about It's a Great Feeling!

It's a Great Feeling Quotes