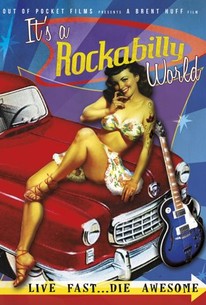 The term dates back the mid-1950s, where it was coined to describe the music - rock-n-roll played by hillbillies - from performers like Elvis Presley, Carl Perkins and Jerry Lee Lewis. It's revival in the 1980s captured the hearts of millions of people as it grew into a complete lifestyle - incorporating cars, clothing, hairstyles and tattoos that all venerate that mid-century decade. IT'S A ROCKABILLY WORLD details it's humble beginnings to the global sensation it is today, not only in the United States but overseas in Europe, South Africa and even Japan. The colorful cast brings you right onto the rockabilly scene-describing how and why they fall in love with this cultural phenomenon. People ranging from Elvis impersonators to actor/musician Drake Bell to everyday working class citizens show you why they wear, pierce, and tattoo themselves so distinctively while driving lowboy Deuce coupés and T Bucket hot rods. This is the type of scene where people from all walks of life give it their all and are not ashamed to do so. IT'S A ROCKABILLY WORLD pulls back the curtain on this outlandish and vibrant lifestyle and shows the good, the bad, and the HIP!

Critic Reviews for It's A Rockabilly World!

There are no critic reviews yet for It's A Rockabilly World!. Keep checking Rotten Tomatoes for updates!

There are no featured reviews for It's A Rockabilly World! at this time.

It's A Rockabilly World! Quotes