It's a Wonderful Afterlife2010 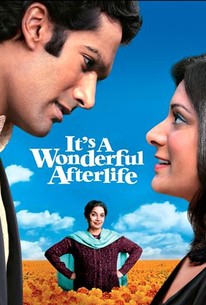 It's a Wonderful Afterlife Photos

My Big Fat Greek Wedding and Shaun of the Dead meet in this charming and fun comedy romp about an Indian mother taking her obsession with marriage into frighteningly funny territory. Mrs Sethi, a widow, can't bear the thought of her daughter being alone and unhappy. Okay, she's a little plump and opinionated...but she would make a great wife for some lucky man, if only she were given a chance. When Mrs Sethi can no longer stomach the rudeness of families who refuse her daughter, she takes matters into her own hands with the only way she knows... Suddenly a police hunt begins for a serial murderer who cooks a killer curry. Mrs Sethi doesn't feel too guilty until the spirits of her victims come back to haunt her as they are unable to be reincarnated until their murderer dies. Mrs Sethi has no problem killing herself - she'll get to see her dead husband again - but how can she go before her daughter is married? The spirits realize that helping Mrs Sethi's daughter find a suitable husband before the police catch her is their only chance for a wonderful afterlife. It's a big bloody wedding and a comic feast which takes the phrase 'I could murder a curry' to hysterical new heights.-- (C) UTV

News & Interviews for It's a Wonderful Afterlife

View All It's a Wonderful Afterlife News

Critic Reviews for It's a Wonderful Afterlife

The sympathetic but sharp writing that made Bend It Like Beckham such an acutely-observed delight goes missing as [Gurinder] Chaddha sets about piling unappetizing scenes involving projectiles masquerading as food and unfunny apparitions.

You don't see that many supernatural serial-killer romantic comedies.

It's a Wonderful Afterlife may be a busy trifle, but it has its good-natured charms and agreeable gross-outs.

A magical realist comedy about the idealization of state-sanctioned heterosexual coupledom.

Its comic premise seems too silly, and at times, too tedious, to hope for much cross-cultural appeal, despite a fine, committed cast.

All the potential for drama and comedy is sacrificed to this totteringly high concept.

All in all, It's a Wonderful Afterlife is essentially a bundle of missed opportunities.

It's A Wonderful Life feels misjudged and, surprisingly mishandled.

Chadha's recipe for the film appears to be: kooky comic supporting characters, crime, romance and essence of Ealing, together with big chunks of other films. Shame, then, that the result is a bit of a hash; more of a lumpy mish-mash than a tasty masala.

I found myself laughing more at badly composed scenes, lame make-up, and poor performances than at the humour.

A refreshingly spry romantic comedy that never loses sight of the fact that levity and love, even against the darkest and most unlikely of backdrops, always prevail.

The feature doesn’t strive hard enough to remain delightfully insane. Instead, Chadha would rather play with broken hearts than entrails. A shame.

Audience Reviews for It's a Wonderful Afterlife

Harmless fluff which makes little sense and is even less believable but has the ever wonderful Sally Hawkins to light up her scenes, especially a fun 'Carrie' spoof.

It's a Wonderful Afterlife Quotes