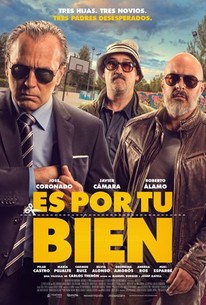 It's for Your Own Good (Es por tu bien) Photos

Three parents, Arturo, Poli and Chus, see their biggest nightmare come true: their three precious little daughters have grown too fast. And what's worse: they've all gotten a despicable boyfriend and want to present it to the family.

When you limit yourself to just two possible outcomes, the lack of suspense kills the comic promise of the premise.

A sly satirisation of male insecurities and a fresh family comedy all in one.

The team behind the film demonstrates its experience in tv series with situations of crazy comedy. [Full review in Spanish]

At this point, it seems impossible that Spanish commercial comedy stays away from what everyone is supposed to like. [Full review in Spanish]

It's for Your Own Good (Es por tu bien) Quotes