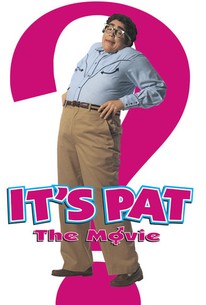 Who and what is Pat? That is what everyone in this little comedy is trying to find out. "Pat," the little androgynous character created by comedian Julia Sweeney, first appeared in a series of sketches on the TV show "Saturday Night Live." Like the early sketches, the film focuses on people's attempts to determine Pat's true gender.

Arleen Sorkin
as Herself

Camille Paglia
as Herself

Dean Ween
as Himself

Gene Ween
as Himself
View All

Critic Reviews for It's Pat

Ever hear the one about the pic that was too bad to be released, so it escaped? Well, that old joke now has a new punch line: It's Pat, a shockingly unfunny Saturday Night Live spinoff.

It's Pat offers a simple message of self-acceptance, asserting that what counts is who you are rather than what your gender may or may not be. The trouble is that its telling is truly terrible.

The story goes nowhere, and if the film ran longer than its 80 minutes, it would have become too tedious to tolerate.

Which is more confusing...Pat's questionable gender or this dud's attempt to force a chuckle from our incredulous faces?

Patently atrocious in every conceivable way.

I can't even dignify this film with a review.

Audience Reviews for It's Pat

Until the end, nobody want to know what it's Pat.

This movie is just as outrageous and creepy as the SNL skits that spawned it, well maybe even more creepy. I didn't find Pat very funny on the show, and if you didn't either, I would not recommend this movie.

This movie is totally hilarious! I love that they made an entire movie which begs us to determine whether "Pat" is a boy or a girl. SHe's so creepy, and Julia Sweeney played her/him wonderfully. The ending is classic, when Pat is revealed nude to the entire audience at a rock concert, but we don't get to find out. This is more than a one joke movie; we also have jokes about Pat's partner Chris, who is just as androgynous. We have jokes about how rude and inconsiderate Pat is with other people. We have the an excellent plot about Pat's neighbour Kyle, who is obsessed with everything Pat. We have the plots about Pat's inability to keep a steady job... I think this movie is very underrated and hilarious.