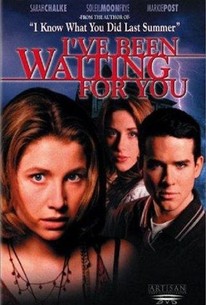 Strange happenings occur when California teenager Sarah (Sarah Chalke) and her mother Rosemary (Markie Post) relocate to the small New England town of Pinecrest. It seems that Sarah shares the same name with a notorious witch who'd been burned at the stake three centuries earlier. Before her death, the "original" Sarah had vowed to get even with all the descendants of the people who persecuted her. A group of snotty high schoolers who've formed The Descendants' Club decide to give the hapless Sarah a very, very hard time -- but the fun is over when, while posing as a fortuneteller at a Halloween party, Sarah discovers that she possesses genuine psychic powers, and foresees a series of disasters that foment a frenzy of mass hysteria in the tiny community. Also tossed into this witches' brew is a mentally challenged serial killer, decked out in a Mike Myers-style mask. Adapted (and heavily laundered) from Lois Duncan's novel Gallows Hill, the made-for-TV I've Been Waiting for You debuted over NBC on March 22, 1998.

Critic Reviews for I've Been Waiting for You

The atmosphere is nicely designed, the cinematography is appropriately unnerving, and the actors take their roles seriously.

Audience Reviews for I've Been Waiting for You

Good film, bit of a confusing ending though! Good cast.

I've Been Waiting for You Quotes