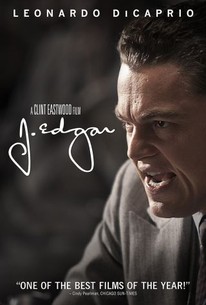 J. Edgar explores the public and private life of one of the most powerful, controversial and enigmatic figures of the 20th century. As the face of law enforcement in America for almost fifty years, J. Edgar Hoover (Leonardo DiCaprio) was feared and admired, reviled and revered. But behind closed doors, he held secrets that would have destroyed his image, his career and his life. -- (C) Warner Bros

David A. Cooper
as Franklin Roosevelt

Dylan Burns
as Hoover as a Child

Craig Zucchero
as Man at the Counter

Gregory Hoyt
as Agent One

Greg Hoyt
as Agent One

The Hoover material is ugly and very American, and it might have made an authentic monster story. But the picture offered is muddled, cautious, and at cross purposes.

It is a solid, expertly crafted biopic, and while it doesn't dive as deeply into its enigmatic central figure as I'd hoped it would that didn't make sitting in the theatre watching every single one of its 137 minutes any less enjoyable.

This muddled melodrama adds up to a missed opportunity.

Hoover was one of the darkest figures in US history but Eastwood and his scriptwriter have forgiven all in a hazy resignation to old age coming to everyone and love being what matters.

J. Edgar is earnestly watchable. But it makes no contribution to a better understanding of Hoover...

An exquisitely made piece.

A well done biopic featuring a couple of fine performances from DiCaprio and Hammer.

Not even Clint Eastwood behind the camera or Leonardo DiCaprio's powerful portrayal is enough to prevent the colossal failure this film exhibits. [Full review in Spanish]

Looking portly and tortured by his feelings of self-doubt and a need for approval, DiCaprio delivers a magnificent performance.

Although the film is suffocated somewhat by its solemnity, and it's hard to ascertain Eastwood's take on his subject, you can't really quibble with its realisation.

A complete disaster that portrays Hoover as a selfish, insecure and intolerant man but we never find out who he really was. Besides, the makeup is atrocious, while the overly desaturated cinematography and dragging pace keep the audience even more emotionally distant.

Great performances by DiCaprio and Armie Hammer. The film is put together well.

A very believable portrait of a very unhappy person who could never accept himself. Excellent film, well written and acted, with DiCaprio giving an outstanding performance. The "aging make-up" of the main characters is rather poor, in my opinion, though. However, the overall quality of the film made me forgive that thanks to Clint Eastwood's style of directing....