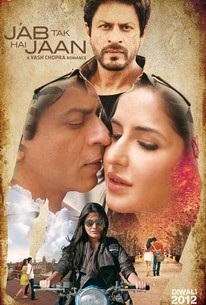 Yash Chopra's last labour of love was his dream ever since his last outing as a director with Veer-Zaara. His untimely demise three weeks before the release of his last film makes this film even more special for fans of Yash Chopra and now the title "Jab Tak Hai Jaan" (Till my last breath) captures the legend and his passion for cinema. This is Bollywood at its best! The film stars The King of Bollywood - Shah Rukh Khan, Katrina Kaif, and Anushka Sharma. Music is by the Oscar-winning A.R. Rahman and produced by Aditya Chopra. (c) Yash Raj

Almost miraculously, the disparate elements add up to an improbably entertaining hybrid.

I didn't buy into the story, but I bought into the heartfelt performances.

JTHJ struggles hard to find its own two feet to stand on.

Finally, what keeps you with the film is Shah Rukh Khan, who is on the top of his game.

A sumptuous if rather soulless love story.

A fine coda to a long career spent giving the people what they want, which is a little bit of everything and a lot of tragic romance.

For a man who gave us Kabhi Kabhie and Silsila, Jab Tak Hai Jaan is certainly not a fitting swansong, but it is a reminder of why his brand of romance always worked.

The mushy moments at the heart of the love story might feel a tad pulpy at times. ButJab Tak Hai Jaan leaves a soothing afterglow.

Shah Rukh Khan is the backbone of JTHJ. He's charismatic as the lover and enigmatic as the army guy. Katrina Kaif is a smart dresser and looks stunning.

Meena Iyer
The Times of India

The insistence that love never wavers is the key romantic trope that characterizes the narrative language of Bollywood films. Chopra was crucial in establishing that standard.

I wonder why Yash Chopra decided to end his directorial career with this one. As if a decade old rejected project was being given a chance back with modifications to suit the time-lapse. There's nothing new or interesting so far as the storyline (love-life of a daredevil/death-defying army officer) is concerned. For the visual effects, it's fine, but that's all there's to it. The performances were okay, though. It'd have been better had he let Veer Zara (which again told the story of two separated lovers with a third actress playing a role in uniting them) be the last one. While Veer-Zara was no less conventional, at least it didn't come off as a hasty project. To each, their own. Check it out for yourself; you might savor it more than any of his other works. (To say the least, rest assured, the movie-viewing experience is far better & endurable than reading this amateur comment.) As a tribute to late Yash Chopra, THE ace (dominating!!) film-maker, I'm assigning this flick 1/5.