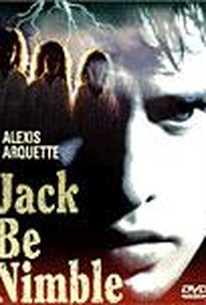 Alternating between urban affluence and rural squalor in its New Zealand setting, this contemporary update of the Brothers Grimm tells the story of a boy and his sister whose placement into very different adoptive homes can't destroy the psychic bond that connects them. An impressionistic opening scene suggests that Jack and Dora's mother has gone off her rocker; soon, the children are packed off to an orphanage, where Dora is adopted by the kindly Mr. and Mrs. Birch (Brenda Simmons and Gilbert Goldie) and Jack falls into the hands of grim farmer Clarrie (Tony Barry) and his bottled-up wife Bernice (Elizabeth Hawthorne). Years later, the teen-aged Jack (Alexis Arquette) suffers through continuing abuse from his proud, sardonic parents and their quartet of vacant-eyed, black-clad daughters. Using an invention that helps focus his nascent hypnotic powers, the lad unleashes his revenge on the family and sets off to find his real sister. Dora Sarah Smuts-Kennedy, meanwhile, has grown up within the comforts of a middle-class home but can't escape her outsider status -- or her special powers, which allow her to sense not only Jack's presence, but also the voices of the dead. With the help of Teddy (Bruno Lawrence), an older telepathic man who wants to bed her, Dora finally finds her way to Jack. But his unhappy childhood has already inflicted too much damage, poisoning the siblings' hopes of a joyful reunion with their birth parents and setting the stage for the savage vengeance of Jack's stepsisters. Garth Maxwell, who previously directed the award-winning gay short Beyond Gravity, made his feature debut with Jack Be Nimble. ~ Brian J. Dillard, Rovi

Critic Reviews for Jack Be Nimble

One of the most beautiful yet simultaneously foreboding New Zealand films ever made (which is saying something), Jack Be Nimble is a masterclass in tone, form and the power of strong performances.

Audience Reviews for Jack Be Nimble

There are no featured audience reviews yet. Click the link below to see what others say about Jack Be Nimble!