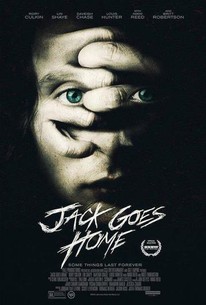 Jack Thurlowe (Rory Culkin) is a successful magazine editor with a beautiful fiancée Cleo (Britt Robertson) who is seven months pregnant with their first child. However, this perfect life is turned upside down when Jack discovers that his parents have suffered a brutal car accident back in his hometown. His beloved father has perished while his mother Teresa (Lin Shaye) has survived. Upon returning home for the funeral, the volatile nature of Jack and Teresa's relationship boils to the surface and the constant barrage of sympathy from the town starts to weigh on Jack's grieving process. With the arrival of a mysterious new neighbor, Duncan (Louis Hunter), Jack finds audio recordings and video tapes left behind by his father that lead him to question childhood memories and the very foundation of his identity. With pressure mounting and sanity crumbling, Jack comes to learn that the idyllic world he has believed in since infancy is in fact a nightmare playground full of lies, deception, violence and murder.

The Accountant Yields a Modest Return on Investment

The script, by Mr. Dekker, spirals into a muddle of ambiguity, leaving only the imagery and the performances to save the movie. And try as they might, they cannot.

While the movie's artfully made and daringly disturbing, Dekker ultimately overestimates how many sick twists one motion picture needs.

What's more disappointing than the competing storylines is the emotional void created by these joyless characters.

The film looks great and has very good performances that grab you and make you want to see what happens next, how it ends.

There is no subtext in Jack Goes Home. It's just text. Nothing is left to the imagination.

[It's] an original and intriguing film that offers a unique perspective on the idea of self, the movie presenting an odd mid-life crisis at twenty-something.

Jack Goes Home triples down on weird and stays in a dark, twisted place. It's a grueling, joyless viewing experience.

... loses coherence about halfway through and falls apart with a series of clumsy revelations.

The horror elements ... [are] insultingly cheap and appallingly lazy, a collection of parlor tricks deployed in a movie that overstays its welcome by 20 minutes.

This is the "snap" people talk about: that indefinable moment where the person you couldn't fathom doing anything heinous transforms into a killer without rhyme or reason.

Jack Goes Home is a breakdown you can't quite grasp, despite some genre merits that certainly embrace the dark.

Matt Donato
We Got This Covered
View All Critic Reviews (12)

There are no featured audience reviews yet. Click the link below to see what others say about Jack Goes Home!