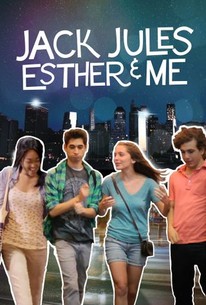 Jack and Lou are unlikely best friends. Jack's from Park Avenue and has everything; Lou's from Jackson Heights and has nothing...except a plan--to win the heart of Jules, his model congress running-mate. Together, Jack and Lou embark on an all out romantic adventure during their last weekend before college. A raucous, warm-hearted comedy, JACK, JULES, ESTHER & ME follows four eighteen-year-olds in New York City - two are rich and two are poor - in their last weekend before starting college and going on to very different futures. Great romantic schemes are hatched and foiled and, along the way, new friendships are created, old bonds reignited, and all four are greatly changed by their last weekend together.(C) Official Site

Poliner uses these stereotypical characters to construct a touching look inside a very emotional period universally ushered in by irreversible change.

There are no featured reviews for Jack, Jules, Esther & Me at this time.