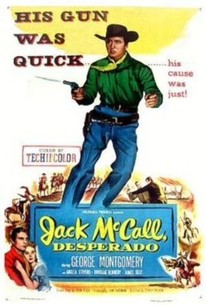 Jack McCall, the man who shot Wild Bill Hickok in the back, is presented in a sympathetic light in this "revisionist" western. During the Civil War, McCall (George Montgomery) is falsely accused of treason. He escapes to prove his innocence, but vengeful union sergeant Will Bill Hickok (Douglas Kennedy) won't let him. It's Les Miserables, western style, not to mention once of the few cinematic depictions of Hickok as an unregenerate villain: Wild Bill even participates in the murder of McCall's parents! Thus, the death of Hickok is seen as a justifiable act of revenge, with Jack McCall living happily ever after with Rose Griffith (Angela Stevens)--and never mind that the real McCall was hanged shortly after plugging Hickok during that fateful poker game.

This routine revisionist B-film Western is set during the Civil War.

There are no featured reviews for Jack McCall, Desperado at this time.