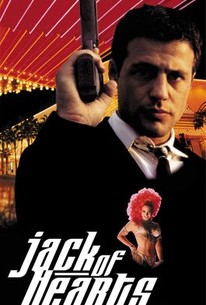 A cop looking for a chance to redeem himself comes up against a man who has built a fortune out of corruption in this thriller. Roy Murcant (Nick Mancuso) is a free-wheeling entrepreneur who has built a multi-million dollar empire on the Las Vegas strip with his own two hands. But not everyone in newly corporate Las Vegas is convinced Murcant is playing by the rules; Murcant's partners think he may be pocketing more than his fair share of the money, while others are certain he's keeping his operation afloat through bribes and kickbacks. Jack Newland (Louis Mandylor) is a police detective new to Las Vegas after questionable behavior cost him his job in Florida. Newland's new job is a final opportunity to make good, and as he investigates allegations of Murcant double-dealings, he learns that Murcant keeps two sets of books -- one for the authorities, and one that tells the real story of his illegal business transactions. Murcant's case would be made if he could find the second set of books, but there are plenty of people in Vegas looking for them, and a few would be willing to kill to get their hands on them. Jack of Hearts also stars Ben Gazzara, M. Emmet Walsh, Lucky Vanous, and Joe Penny.

Sandy Hackett
as Benny
View All

Critic Reviews for Jack of Hearts

There are no critic reviews yet for Jack of Hearts. Keep checking Rotten Tomatoes for updates!

There are no featured reviews for Jack of Hearts at this time.