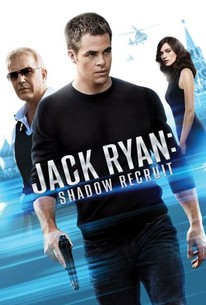 Based on the character created by bestselling author Tom Clancy, "Jack Ryan" is a global action thriller set in the present day. This original story follow a young Jack (Chris Pine) as he uncovers a financial terrorist plot. The story follows him from 9/11, through his tour of duty in Afghanistan, which scarred him forever, and into his early days in the Financial Intelligence Unit of the modern CIA where he becomes an analyst, under the guardianship of his handler, Harper (Kevin Costner). When Ryan believes he's uncovered a Russian plot to collapse the United States economy, he goes from being an analyst to becoming a spy and must fight to save his own life andthose of countless others, while also trying to protect the thing that's more important to him than anything, his relationship with his fiancée Cathy (Keira Knightley). (c) Paramount

I. King Jordan
as Aide

Meghann Marty
as UN US Interpreter

The vulnerability of the Jack Ryan character is still present, something very important that keeps us rooting for him.

"Shadow Recruit" is fun in a minor, winter-season way.

I'm aware that commercial and cultural forces require everything to be rebooted triennially with fresher, hotter stars. But this is the second time the Jack Ryan franchise has rejected a youth transplant.

It's rare that a movie like this should be longer, but a little elongating might help this clipped, B-grade thriller resonate a little deeper.

[T]he film's second half seems determined to snuff out the promise of its first, making it hard to wish for this incarnation of the character, or any, to have more big-screen adventures.

Hardly earth-shattering, then, but efficient and entertaining nonetheless.

With all the poor choices the film makes, I have to say I was never bored.

Chris Pine follows in the footsteps of Alec Baldwin, Harrison Ford and Ben Affleck by taking on the role of Tom Clancy's hero in Jack Ryan: Shadow Recruit.

The first Ryan movie after a twelve-year break. It wasn't worth the wait.

Hollywood vets Branagh and Costner pretty much steal the show.

It has some genuinely tense moments, but the story remained thin and recycled ... It was as though I watched a rerun of a one hour TV show stretched out to a two hour film.

An unoriginal and forgettable movie so full of worn-out clichés and so far-fetched that it will only be surprising or exciting for someone who has never seen anything in their lives before, with also an intrusive, clichéd score and a good cast that certainly deserved better.

Starting out slowly to give some (superficial) background to the character and the economic aspect of the premise does not sound all that interesting at first. But once the terror threat enters the equation the film kicks into gear for a really fast, well done and exciting second half. Then it's great thriller entertainment culminating in a pretty great showdown.

Here's the latest entry in the Jack Ryan franchise, as a complete reboot. Ryan(Chris Pratt) tries to stop a financial terrorist. Although the movie is decent, it's the same as most spy/espionage movies, and doesn't really bring anything new to the table. The cast is good, although Keira Knightley is completely wasted. Her role could have been played by anyone. Pratt does good, and I'd like to see what else he can do with the character. As a jumping off point for a new franchise, it's OK. But if they make a sequel that doesn't improve a lot, this franchise won't have any legs, and will have to wait to be eventually rebooted. Worth a rental or bootleg, but I wouldn't buy it. Not something I'll be clamoring to watch again anytime soon.

Technically strong and stylish with a good performance from Costner, although the plot is poorly developed and the detective work is improbable and almost entirely based on lucky guesses. Because of this, I really felt cheated out of half the suspense and it did nothing to give the impression that Jack Ryan was a particularly talented analyst. The film is fun, near-mindless action, but really is not worthy of the Jack Ryan franchise.