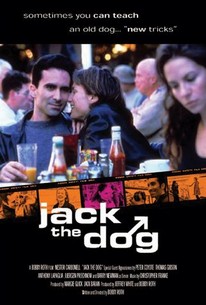 One man's insatiable appetite for sex begins upending his life in this biting independent comedy. Jack (Nestor Carbonell) is a photographer known to his friends as "Jack the Dog," thanks to his compulsive womanizing; Jack seems incapable of staying with one partner for long before he finds himself attracted to someone else, and given his good looks and easy charm, Jack doesn't have much trouble convincing the women he meets to spend the night with him. Deep inside, Jack wants to change, and he tries to put himself on the straight and narrow by marrying Faith (Barbara Williams). Jack and Faith soon have a son, Sam (Andrew J. Ferchland), whom Jack dotes upon, but Faith turns out to be a poor advertisement for long-term monogamy; she's not especially warm or forgiving, and she's started to show her age, which only intensifies Jack's taste for younger women. Jack soon slides into chronic infidelity, and Faith leaves him, relocating to London and leaving Sam behind. This is good news as far as Jack's concerned, but as he tries to watch over his son, while also seducing an endless parade of beautiful women, Jack finds himself increasingly puzzled by the opposite sex, and he wonders if he might have a problem he hasn't learned to deal with. Jack the Dog received its world premiere at the 2001 Sundance Film Festival.

Critic Reviews for Jack the Dog

There are no critic reviews yet for Jack the Dog. Keep checking Rotten Tomatoes for updates!

Audience Reviews for Jack the Dog

There are no featured audience reviews yet. Click the link below to see what others say about Jack the Dog!