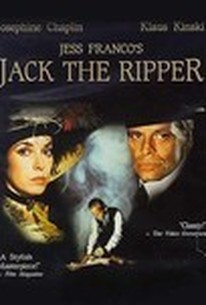 One of the better efforts from prolific cult director Jesus Franco, this Swiss-German horror film stars Klaus Kinski, in his final film for Franco, as the notorious Jack the Ripper. A respected doctor by day, Kinski bloodily dismembers London prostitutes by night, until the local Inspector's girlfriend (Josephine Chaplin) goes undercover to catch him. Full of graphic gore and nudity, the film is likely to appeal to horror buffs more than Kinski's usual fanbase, but his is a mesmerizing and quite effective performance. Herbert Fuchs and Lina Romay are among the Franco regulars in the cast, with Fuchs turning in an amusing cameo as a would-be extortionist. ~ Robert Firsching, Rovi

There are no critic reviews yet for Jack the Ripper (Der Dirnenmörder von London). Keep checking Rotten Tomatoes for updates!

There are no featured reviews for Jack the Ripper (Der Dirnenmörder von London) at this time.