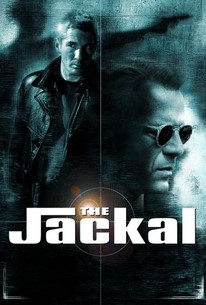 Critics Consensus: The Jackal is a relatively simple chase thriller incapable of adding thrills or excitement as the plot chugs along.

Critics Consensus: The Jackal is a relatively simple chase thriller incapable of adding thrills or excitement as the plot chugs along.

Critic Consensus: The Jackal is a relatively simple chase thriller incapable of adding thrills or excitement as the plot chugs along.

In Moscow, after FBI deputy director Carter Preston (Sidney Poitier) and scarred Russian intelligence officer Valentina Koslova (Diane Venora) bring down a key figure in the Russian Mafia, they are threatened by the criminal's powerful brother who swears vengeance on the FBI and immediately hires a professional assassin, the Jackal (Bruce Willis) to kill a leading American political figure. A master of disguises, the Jackal believes in total perfectionism and demands $70 million for the job. The FBI suspects the Jackal is aiming for the FBI director, so they consult with former Basque terrorist Isabella (Mathilda May), in Virginia, and Isabella's former lover, IRA operative Declan Mulqueen (Richard Gere), serving a prison sentence. Promised leniency, Mulqueen agrees to help. Meanwhile, the Jackal prepares false passports, secures a customized computer system to run his Gatling gun, and heads toward his target in Washington, D.C. ~ Bhob Stewart, Rovi

Bruce Willis
as The Jackal

Tess Harper
as The First Lady

Mathilda May
as Isabella

Michael Caton-Jones
as Man in Video

Laura Viederman
as Woman in Video

James McCauley
as CIA Rep. No. 1

Danette Alberico
as Woman with Champagne

Debra Gano
as Woman with Champagne

Eddie B. Smith
as Washington Cop

Daniel Ziskie
as CIA Rep. No. 2

Critic Reviews for The Jackal

The usually reliable director Michael Caton-Jones hasn't a clue how to freshen up such stale material. If you bite your fingernails, it will only be from boredom.

The international pursuit grows borderline monotonous but there is a jump in pacing during the Washington, D.C., climax.

The Jackal is a glum, curiously flat thriller about a man who goes to a great deal of trouble in order to create a crime that anyone in the audience could commit more quickly and efficiently.

The less-than-engrossing vibe is, at least, tempered by the effectiveness of the three leads' work and a smattering of compelling sequences...

It delivers in the shoot-'em-up mentality, not to be taken seriously but a fun thing to watch on a Saturday afternoon.

The simple chase set-up is promising, but the follow-through is curiously lethargic and suspenseless.

A fast-paced, underrated reworking of the often-sluggish Day of the Jackal. Willis is good as the villainous title character. More enjoyable than anyone wanted to admit.

Whether you like original action movies, or female empowerment, either way you will be disappointed.

There's a certain novelty factor at work here that may appeal to die-hard Willis fans... As to everyone else, it's hard to imagine why they'd want to bother.

Audience Reviews for The Jackal

A cold blooded professional assassin is hired by the Russian mob and a joint FBI-Russian secret service task force race against time to prevent him from reaching his target in the USA. Allegedly a remake of The Day Of The Jackal, this film actually has very little in common with it. The original was a study of an ice cold killer who always kept two steps ahead of the authorities and is unusual for its distinct lack of action. This is more like a cross between In The Line Of Fire and The Rock with the American studio system unwilling to go without a pointless explosion or irrelevant car chase at strategic intervals. Bruce Willis was a very odd casting choice for the part, usually relying on his charm and quips but some dodgy hairstyle choices aside, he is reasonably OK. Sidney Poitier is as reliable as always as the pursuing FBI agent and is nicely complimented by Diane Verona and Richard Gere whose Irish accent is almost bearable (compared to some of the others I've heard in this type of film. Blown Away for example...) Whether you enjoy this film or not is going to rely entirely on if you can swallow the glaring absurdities of the plot; namely the fact that all these international terrorists seem to know each other as if there is some Al-Qaeda social club where they all share eggnog at christmas or something, the implausible final confrontation and the vendetta between the central characters which completely misses the point of the original. All in all, it's just another silly Hollywood action thriller and if that's what you expect then that's what you'll get.

Finally got round to seeing this, been meaning to for years! This is a very enjoyable action/thriller centered around a hunt for an elusive hitman. The emphasis is definitely on the action, seeing Willis go through about 10 different looks as a master of disguise was fun. The tension builds as the day of the hit gets closer, will the FBI and Russian agents be able to stop him? This has a great cast including Richard Gere, Sidney Poitier and even Jack Black makes an early film appearance. The whole Manhunt, assassin films have been done bigger and better since this was made. However this is still a classy enjoyable film.