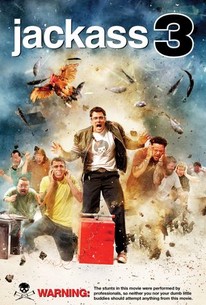 Critics Consensus: The Jackass gang might be running out of gross-out stunts, but this installment contains plenty of brilliantly brain-dead comedy -- and the 3-D adds a pungent new dimension.

Critics Consensus: The Jackass gang might be running out of gross-out stunts, but this installment contains plenty of brilliantly brain-dead comedy -- and the 3-D adds a pungent new dimension.

Critic Consensus: The Jackass gang might be running out of gross-out stunts, but this installment contains plenty of brilliantly brain-dead comedy -- and the 3-D adds a pungent new dimension.

Johnny Knoxville and his buddies are up to their daredevil comic antics again. And this time they're coming at ya' in 3D.-- (C) Paramount

There is a reason these men have thrived for so long in a world where any moron with a Flip Video can get on YouTube. They are simply the best at what they do.

Just a case of 'same s***, different day'. Literally, in some cases.

This latest collection of stunts from Johnny Knoxville and his crew of masochistic nutters achieves at least one distinction: it showcases the most pointless use of 3D in movies.

It might be the guiltiest of pleasures, but there's no question Jackass 3D delivers.

Why can't non-Jackass films show this kind of energy, clarity, force and ingenuity?

The performers are getting older, and their laughter seems as strained as it always does in zoo-format entertainments.

Impressively, the guys have learnt from their previous outings. This feels slicker and tighter, with less emphasis on Spike Jonze dressing up as an old guy.

These guys are the taunting yet fiercely loyal friends we've kind of always wanted in our lives.

In its own universe, it's close to perfect. I laughed so hard, tears streamed down my face. [Full review in Spanish].

I think a blanket apology to both audiences and the cast themselves would be more appropriate - it should never have come to this.

I pop this into my DVD player every four months. It's a film with a definite audience, and if you're not a part of it, stay far, far away.

Chris Pontius: That had it all - it had danger, it had shit, it had puke, I mean that's what this show's all about.  "Do not attempt this at home." Jackass is heaven for people who love watching people do crazy shit. This is for all those people out there that love getting their friends drunk and seeing what stupid stunts they will do. The movie is full of the Jackass norms, there's bulls, snakes, piss, shit and other stuff you just don't want to talk about. If you like the show and liked the previous two movies, there is no reason you shouldn't like this one. Sure, it is the same exact thing, but it just never gets unfunny.  The movie has a few new favorite Jackass moments for me. There is the stunt where Knoxville gets laid out by Jared Allen. Before it, Allen is asked what his job is and to this says, "To murder Knoxville's face!" Another new favorite is the midget fight in the bar; fucking hilarious. And last but not least, I loved the Grandpa segment, where Knoxville makes out with his supposed granddaughter. All I have to say is that is one sexy granddaughter they got to play that part. A lot of the stunts are repetitive. Yeah, they get Bam with snakes again. But what makes it still funny is that they take stunts they've done in the past and just make them crazier or grosser somehow. God, the Sweat Cocktail almost made me puke. A majority of people who are out of twenties aren't going to like this form of bodily humor. It's gross and it's dangerous, but who cares, because more importantly, it's funny. R.I.P. Dunn

I thought it was good, but I thought Jackass 2 was better. My rating for that movie was a 4, so this is a solid 3.5.