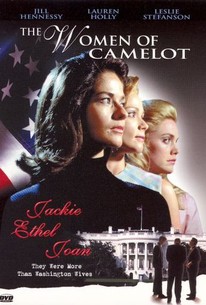 In response to the public's insatiable fascination with the Kennedy family, the NBC network brought forth this two-part miniseries, based on a book by Randy Taraborelli. Described by the author as "Knot's Landing goes to Capitol Hill," Jackie, Ethel, Joan: The Women of Camelot covers a time span of 25 years, from the marriage of John F. Kennedy and Jacqueline Bouvier to the 1980 presidential bid of JFK's brother Teddy. To many observers, the film seemed to consist primarily of TV news bulletins announcing various and sundry Kennedy tragedies, punctuated by long, long discussions between the wives of JFK, Bobby, and Teddy regarding their husbands' various infidelities. Some of the intrigues are based on fact, notably the uneasy relationship between Jackie and Bobby's wife Ethel, and the drinking problems shared by Teddy and his wife Joan. Other segments, however, fall back on rumor and hearsay, notably the scenes involving Marilyn Monroe. At the very least, the three actresses chosen to play the title roles -- Jill Hennessy (Jackie), Lauren Holly (Ethel), and Leslie Stefanson -- looked, sounded, and behaved exactly like their real-life counterparts. Jackie, Ethel, Joan: The Women of Camelot originally aired on March 4 and March 5, 2001.

There are no critic reviews yet for Jackie, Ethel, Joan: Women of Camelot. Keep checking Rotten Tomatoes for updates!

There are no featured reviews for Jackie, Ethel, Joan: Women of Camelot at this time.