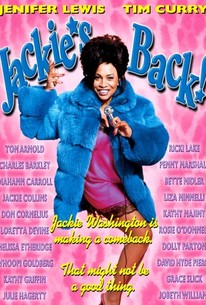 Soul diva Jackie Washington is determined to hit the comeback trail but seems to be having trouble finding the on-ramp in the mock-documentary comedy Jackie's Back. Jackie (played by Jenifer Lewis) was a Rhythm and Blues singer who had a few late '60's and early 70's hits, including "Yield" and the memorable "Look At Me (My Love For You Has Only Made Me Love Me More)," but she's spent much of the 80's and 90's playing the "Where Are They Now?" circuit. However, Jackie has organized what she hopes will be a gala comeback concert, and filmmaker Edward Whatsett St. John (Tim Curry) is on hand to film the event, and discusses the high and (frequent) low points of Jackie's career with such friends and well-wishers as Bette Midler, Liza Minnelli, Penny Marshall, Jackie Collins and Dolomite himself, Rudy Ray Moore. Meanwhile, Jackie's big gig is not going quite the way she planned. Directed by Robert Townsend, Jackie's Back was produced for the Lifetime Cable Network and originally aired June 14, 1999.

Critic Reviews for Jackie's Back

That tension, between the overblown diva and her crew, underlines much of the jokes in Jackie's Back.

Audience Reviews for Jackie's Back

There are no featured audience reviews yet. Click the link below to see what others say about Jackie's Back!