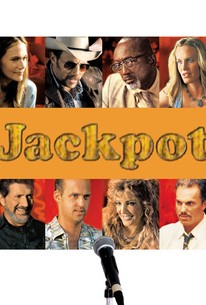 Critics Consensus: A somewhat aimless movie that's too artsy for its own good.

Critics Consensus: A somewhat aimless movie that's too artsy for its own good.

Critic Consensus: A somewhat aimless movie that's too artsy for its own good.

Set 100 miles south of the setting of the Polish brothers' first feature, Twin Falls Idaho, Jackpot tells the story of Sunny Holiday Jon Gries, a down-on-his-luck karaoke dweller who has hopes of becoming a country singer. He has abandoned his feisty wife Bobbi (Daryl Hannah) and young daughter to set off on a nine-month road odyssey with his manager Lester Irving (Garrett Morris), in an effort to collect cash at local karaoke gigs. Lester grooms Sunny by choosing what songs he will do, keeping up with what the judges are like, and negotiating with competitors like Sammy Bones (Mac Davis), another traveling hopeful. On his road journey, he encounters several women, including Janice (Peggy Lipton), a club waitress, and Cheryl (Crystal Bernard), whom he takes home after she has an accident in a restroom, only to find himself being enticed by her underage daughter Tangerine (Camellia Clouse). The road trip comes to a stop, however, when Sunny is pulled over by police who claim that his vehicle is stolen and that Bobbi has reported it. Sunny then seeks refuge with brother Tracy (Anthony Edwards) while he decides his next move. Jackpot is the first released film to be shot with the 24P HDTV camera, which was then blown up to Cinemascope 35 mm format.

Dig Wayne
as Never My Love

Ashley Cohen
as Cheerleader One

David Cannizzarro
as Karaoke Jockey One

Gil Gail
as State Trooper One

This is a comedy but the laughter it prompts is dark and parched.

Because there is no real chance Sunny will triumph -- Rocky this isn't -- we await the end with the same polite, mildly bemused vacancy with which we await the end of a serious karaoke performance, only without the benefit of alcohol.

For anyone interested in a movie that wipes clean the grungy patina of self-delusionment, Jackpot hits solid pay dirt.

Ends up a lot like Sunny's singing: pointless and more than a little flat.

There's a sense in which we're always waiting for it to kick in.

Gries and Morris play this luckless, clueless pair with such understanding and presence that they make Sunny and Lester come alive in every scene.

The Polish brothers are clearly talented; all they need now is a story that's more interesting than this one.

The Polish brothers are onto something about their view of small-towns in the western part of America...

"Jackpot" is a downbeat but effective character study ...

Has its moments, but if we're meant to care about these losers, the film misses by a mile.

The Polish brothers seem more intent on giving their film an artsy sheen than on making sense of the characters or their plight.

These appealing characters wear out their welcome at about the same time it becomes apparent they're going nowhere slowly and that the teasing promises made by the story's fractured sensibility will be modestly realized at best.

There are no featured audience reviews yet. Click the link below to see what others say about Jackpot!