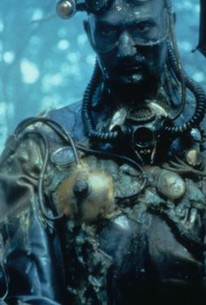 Based on noted Montreal author Mordecai Richler's classic children's adventure of the same name, the film is about a boy named Jacob (Max Morrow) who has to say everything twice to be heard, simply because he is the youngest of five children. Desperately needing to be taken seriously, he offers to go to the grocery store for his Dad, embarking on his first solo journey. The quest goes horribly wrong when he loses his nerve and runs off, only to bump into a ten-pound hanging salami. He wakes up to find himself in court charged with insulting a grown-up. The Singing Judge sentences Jacob to the children's prison on Slimer's Island. The fog-bound and crocodile infested prison is presided over by the fearsome Hooded Fang (Gary Busey). Help is supposed to be on its way in the form of the heroic Child Power Masters. When that is delayed, Jacob Two Two hatches a cunning plan to take on the Hooded Fang himself. Fraught with childhood fantasies and fears, the film encourages children to feel strong in the threatening world of adults.

Gary Busey
as The Hooded Fang

Ice-T
as The Judge

Alexandra Johnson
as Hannah
View All

There are no critic reviews yet for Jacob Two Two Meets the Hooded Fang. Keep checking Rotten Tomatoes for updates!

Not very good version of the Jacob Two-Two story by Mordecai Richler. A lot of it was because of how perfect the 1977 film was; so this one's flaws stuck out. The kid playing Jacob Two-Two was pretty generic and lacked character. The Ice-T rap-session in the courtroom didn't seem to fit. Gary Busey as the Hooded Fang was scary for all the wrong reasons. Mark McKinney and Miranda Richardson seemed like standup comics in animal costumes. The prison set didn't feel like the one described in the book. The songs were dreadful. It felt English rather than French, losing its special charm. Cheap and direct to pay-per-view and Blockbuster bargain bins.