James and the Giant Peach1996 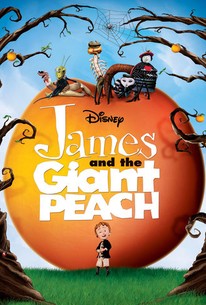 James and the Giant Peach Photos

A young boy's discovery of a gigantic peach triggers an eventful journey across the sea in this strikingly designed and surprisingly twisted animated adventure. A live-action framing device establishes the dark yet fanciful mood one might expect from an adaptation of a Roald Dahl story, as young British lad James (Paul Terry) is orphaned by the death of his parents and forced to live with two cruel, repulsive aunts (played by noted British character actors Miriam Margolyes and Joanna Lumley of British TV hit Absolutely Fabulous). The visit of a mysterious stranger provides a means of escape, however, through a magic bag of "crocodile tongues" that bring about the appearance of the giant peach. The curious James soon winds up inside the fruit, at which point his body changes, and the film switches to a combination of stop-motion and digital animation. The new James meets up with a group of talking, oversized insects, including a vampish spider (voiced by Susan Sarandon), a sarcastic centipede (voiced by Richard Dreyfuss), and a matronly ladybug (voiced by Jane Leeves). These creatures become his traveling companions when the peach rolls into the Atlantic Ocean, and James and his new friends must brave a variety of dangers to reach the shore. Director Henry Selick provides further proof of the visual skill he demonstrated in The Nightmare Before Christmas, creating a fascinating, often eerie alternate universe, while Randy Newman provides the upbeat musical accompaniment. Young children may be disturbed by the story's creepier overtones, but the mixture of remarkable visuals, oddball characters, and off-kilter fantasy will appeal to all other audiences. ~ Judd Blaise, Rovi

Girocco Dunlap
as Girl With Telescope

Katherine Howell
as Woman in Bathrobe

News & Interviews for James and the Giant Peach

View All James and the Giant Peach News

Critic Reviews for James and the Giant Peach

Dahl himself thought his book would be impossible to translate into film, and for all the ingenuity that's been thrown at the screen, perhaps he was right. This overgrown peach never ripens.

The film is a technical tour de force, featuring a wealth of inventive design ideas. But James never develops the emotional dimension that Nightmare possessed.

A snappy, fun adaptation that entertains young viewers without speaking down to them.

As a tribute to the cranky genius of Dahl, it's both fond and, in the best sense, fruitful.

This movie remembers what fun is.

James and the Giant Peach shines with weird, whimsical invention.

...valiantly attempts to convey the amazement and childlike sense-of-wonder so characteristic of the late Dahl's books, and while it does succeed occasionally, more often than not it falls flat.

This film adaptation of his James and the Giant Peach, though capturing Dahl's comic brilliance, does not shy away from the tale's surreal grimness.

A truly sinister fairy story laced with bizarre characters -- both live-action and animated -- James and the Giant Peach from Walt Disney Pictures is a stunning, if not markedly macabre, adaptation of author Roald Dahl's best-selling 1961 book.

A brief nightmare sequence, which appears to be some sort of hallucinatory blend of collage and live action, is simply one of the greatest bits of animation I've ever seen.

Ultimately, though, it isn't nearly as flavorful as Roald Dahl's deliciously perverse children's book, upon which the movie is based.

Audience Reviews for James and the Giant Peach

James and the Giant Peach is a very good film. But I did not think it was as good as Nightmare Before Christmas. The film is a perfect family film, but I felt it missed something to really make it special. The film is good, and I enjoyed it, but it's not as great as what everyone has claimed it to be. I personally preferred Nightmare Before Christmas. This is however a film that the whole family can enjoy, and despite its flaws it is a memorable film to watch. I enjoyed the film for what it was. Despite its flaws, this is a well done film with great special effects. James and the Giant Peach isn't as great as so many other animated classics, but it's still a good film. The voice cast here are great, and the characters are interesting and fun. I just feel something is missing to truly make this one a classic. On the technological stand point, this film stands out. As a whole, this is an entertaining film and despite its flaws is still worth watching. I enjoyed the film, even if it's not the best animated feature that I've seen. A good family film with heart, James and the Giant Peach is still worth seeing. A good cast and good story make up for most of its flaws. A fun adventure from start to finish, this film will appeal in the kid in all of us. Like I said, the beauty part of this film is in its details, but I feel the story, though good, could have been reworked a bit more, just to make it a bit more memorable. Still a film worth watching.

This movie takes me back to 3rd/4th grade. One of those movies you couldn't forget even if you tried.

This movie is really cool, it's based on a good children's book, directed by Selick (who directed Nightmare Before Christmas), and it's got wonderful clay animation. Why isn't it better than it is? Maybe because it was a little too goofy? Or it was the songs, I don't know, but for the most part this is a good movie.

James and the Giant Peach Quotes