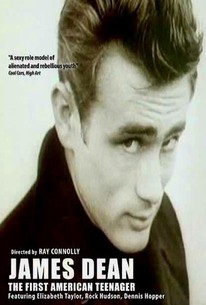 In this documentary, narrated by Stacy Keach, the tragic screen-icon James Dean is remembered. Footage from early television appearances, stills from his life, and clips from his three Warner Brothers films are interwoven with interviews with his co-workers. The soundtrack includes music from Elton John, David Bowie, and the Eagles. ~ Clarke Fountain, Rovi

The result is specious at best.

There are no featured reviews for James Dean: The First American Teenager at this time.