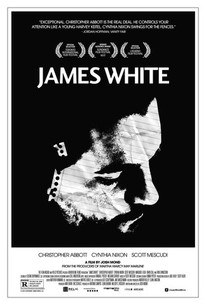 James White (Christopher Abbott) is a troubled twenty-something trying to stay afloat in a frenzied New York City. He retreats further into a self-destructive, hedonistic lifestyle, but as his mother (Cynthia Nixon) battles a serious illness James is forced to take control of his life. As the pressure on him mounts, James must find new reserves of strength or risk imploding completely. The directorial debut of MARTHA MARCY MAY MARLENE producer Josh Mond, JAMES WHITE, which had its world premiere at Sundance Film Festival 2014 where it was the winner of the "Best of Next" Audience Award, is a confident and closely observed debut that explores loss and the deep relationship between a mother and son. Abbott's strong central performance is aided by a stellar supporting cast featuring Cynthia Nixon ("Sex and the City"), Scott "Kid Cudi" Mescudi ("Comedy Bang! Bang!"), and Ron Livingston (DRINKING BUDDIES). Shot on location in New York City with an intimate visual style, JAMES WHITE follows its lead into deep, affecting places while still maintaining its fragile humanity.

Carlos González
as Down Low Guy

It's not easy viewing by any means. But it is strangely refreshing for a movie to show us that terminal illness involves agony and vomit and terror, despite what Beaches might have told us.

Whether you want to spend time with "James White" depends on your tolerance for yet another film about how hard it is for guys who just feel too much.

The experience of watching "James White" is like being shut up in a small, dark, airless room ... a sickroom.

It's Abbott who's the revelation, showing off all sorts of previously unseen leading-man potential.

An accomplished and compelling film by writer/director Josh Mond, James White is also pretty much a bummer.

Abbott contributes a smart, soulful performance, but Nixon keeps threatening to walk away with the movie as the mother, who can't get enough of life and whose physical decay is colored by rage, defiance, and terror.

It gives a very brief, specific glimpse of a situation touching on the universal experience of loss, and through it delivers an incredibly strong drama.

James White is not an enjoyable film, but it amply fulfills its goal in being a piece that resonates honestly with its audience.

A minimal approach creates an unflinching character study that relies on performance over traditional narrative.

A chillingly up-close-and-personal observation of a young man bubbling with so much emotion that he exists perpetually at the precipice of physical and psychological implosion.

An unnervingly personal character study about alienation and self-pity in the millennial age.

James White is a heartbreaking movie that runs on emotional adrenaline more than dramatic structure.

The world doesn't need any more movies about angry, aimless, and affluent white men in their late 20s . . . however, it's hard to dismiss a movie with as many good elements as this one has. Abbott's phenomenal in the lead role and I like how the camera movements are perfectly in sync with his erratic mood swings.