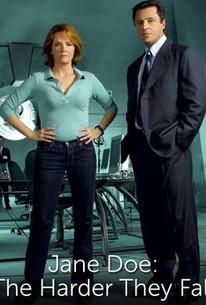 Lea Thompson is both star and director of this made-for-cable movie, another entry in the Hallmark Channel's series about a suburban housewife who leads a double life as a government agent. Not long after he is fired from the staff of a billionaire cereal-company mogul, former Central Security Agency operative Jim Monroe (Dorian Harewood) is found floating in a lake, the apparent victim of an accidental drowning. Suspecting foul play, CSA head Frank Darnell (Joe Penny) prevails upon his former colleague Cathy Davis (Lea Thompson) to investigate. Assuming her CSA identity as "Jane Doe", Cathy quickly deduces that Monroe was killed 48 hours before his alleged drowning. There's only one problem with this theory: Monroe was seen on a nationally telecast interview at the exact time of his death! In her efforts to crack the case, Cathy must once again delicately balance her high-risk espionage activities with her "normal" marriage to the long-suffering Jack Davis (William R. Moses). Jane Doe: The Harder They Fall was first seen on March 4, 2006.

Critic Reviews for Jane Doe: The Harder They Fall

There are no critic reviews yet for Jane Doe: The Harder They Fall. Keep checking Rotten Tomatoes for updates!

There are no featured reviews for Jane Doe: The Harder They Fall at this time.