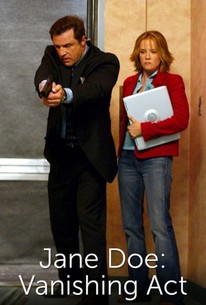 Jane Doe: Vanishing Act is the first of several Hallmark Channel TV-movies starring Lea Thompson as Simi Valley housewife and mom Kathy Davis (Lea Thompson), who unbeknownst to her family occasionally moonlights as an undercover special agent and "problem solver" for the NSA. Having previously worked as a spy, Kathy is pulled out of an 18-year retirement by NSA operative Frank Darnell (Joe Penny) in hopes that she will be able to locate a missing file containing all of America's defense secrets, which was stolen from a plane in flight--along with the computer whiz who created the file. Adhering to her policy of "eliminating the impossible", Kathy--cover name "Jane Doe"--tries to figure out a logical method by which the file was heisted, a task made difficult by the vague recollections (and shady pasts) of the witnesses to the crime. As she gets deeper into the case, Kathy herself is placed in harm's way, to say nothing of her unwitting family. Jane Doe: Vanishing Act originally aired January 21, 2005.

There are no critic reviews yet for Jane Doe: Vanishing Act. Keep checking Rotten Tomatoes for updates!