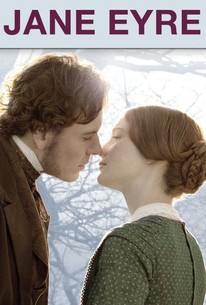 Raised by her aunt Sarah (Sally Hawkins) after her parents die of typhus, young Jane Eyre (Amelia Clarkson) is later shipped off to a stark boarding school as the result of her perceived insolence, and suffers greatly at the hands of the cold, unusually strict administration. Upon turning 18 and completing her education, Jane (Mia Wasikowska) finds work as a governess for Adle Varens (Romy Settbon Moore), the ward of Edward Fairfax Rochester (Michael Fassbender), master of Thornfield Hall. It doesn't take long for the young Adle to warm to Jane, and upon returning home the charming Rochester, too, falls under the spell of his modest yet captivating governess. On what was supposed to be the happiest day of Jane's life, however, a scandalous secret is revealed, and the emotionally shattered governess takes flight... ~ Jason Buchanan, Rovi

What it does right it does very right. It is stunningly mounted, for example... But what it does wrong is fatal, and the error is this: it just isn't passionate or sexy enough.

Jane Eyre triumphs with a suitably bleak landscape and an excellent performance from Michael Fassbender, but the restrained tone lets it down.

The direction by Cary Fukunaga is real by-the-numbers rote.

The new Jane Eyre is notably well-made in almost every respect and should you want to watch an adaptation of the story just now, highly recommendable.

Some works of art are inexhaustible, and this is proving one of them.

The film should only cement the growing reputation of Wasikowska.

This Jane Eyre adaptation far surpasses any of the previous film versions by benefiting from a master execution by director Cary Fukunaga. [Full review in Spanish]

It really is hard to find a fault with this latest adaptation of Jane Eyre. It's certainly one of the most tonally stringent period films of recent years.

I have certain expectations when I go to see a period romance, and this blew every single one out of the water.

The production design and costumes are indeed exquisite, as well as the absorbing Gothic atmosphere. However, the film lacks passion and mystery, while the dialogue sounds incredibly cheesy and Wasikowska is too apathetic for the role.

I liked this adaptation but I didn't find it better than other adaptations for some reason. The cinematography is very good and the acting is not bad but I just didn't see the chemistry between the leads. I think Wasikowska was missing passion from her role.

This movie is why I fell in love with Michael Fassbender. Ask me to marry you, Michael. I'd say, "yes"!

Typical "bonnet" drama. Not really my favourite, but not too bad for what it was. Only watched it because it was a free rental. If you like the story, you will probably enjoy this.