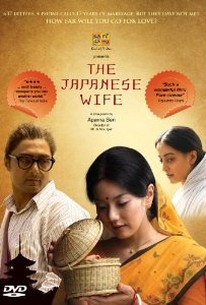 A shy schoolteacher struggles to reconcile his marriage to the Japanese wife he never met with his relationship to a widow who helps him realize his fleeting dreams of fatherhood and domestic bliss. Snehamoy Chatterjee was a student at Serampore College when he saw an ad for a pen-pal in a magazine. Unable to relate to his extroverted classmates, he sent a letter and soon got a response from Miyage, a friendly Japanese girl hungering for human contact. Unable to communicate in their native tongues, the two exchange letters in English, forging an intimate bond on the written page. Eventually, Snehamoy and Miyage agree to marriage, exchanging gifts through the mail as symbols of their union since they can't afford to meet for an actual ceremony. Years later, Snehamoy is teaching arithmetic in West Bengal when a young widow named Sandhya and her eight year old son Poltu come to stay with him while Sandhya attempts to find a new husband. Meanwhile, Snehamoy discovers the joys of parenthood while acting as a surrogate father to Poltu, and finds out what it's like to share a home with a spouse as Sandhya starts helping out around with the housework. But when Miyage falls ill, Snehamoy takes a leave from work in a desperate attempt to find a doctor who can save her. Later, Snehamoy falls ill with pneumonia, drifting into a delirious fever dream about his far-away wife as Sandhya dutifully cares for her ailing host.

In it's most effective parts, the beautifully-lensed The Japanese Wife is like a haiku, saying a lot without underlining too much, a rare thing in our movies.

There are no featured audience reviews yet. Click the link below to see what others say about Japanese Wife!