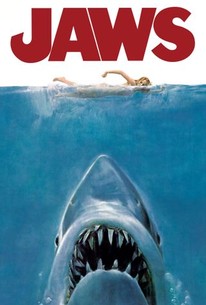 Based on Peter Benchley's best-selling novel, Steven Spielberg's 1975 shark saga set the standard for the New Hollywood popcorn blockbuster while frightening millions of moviegoers out of the water. One early summer night on fictional Atlantic resort Amity Island, Chrissie decides to take a moonlight skinny dip while her friends party on the beach. Yanked suddenly below the ocean surface, she never returns. When pieces of her wash ashore, Police Chief Brody (Roy Scheider) suspects the worst, but Mayor Vaughn (Murray Hamilton), mindful of the lucrative tourist trade and the approaching July 4th holiday, refuses to put the island on a business-killing shark alert. After the shark dines on a few more victims, the Mayor orders the local fishermen to catch the culprit. Satisfied with the shark they find, the greedy Mayor reopens the beaches, despite the warning from visiting ichthyologist Hooper (Richard Dreyfuss) that the attacks were probably caused by a far more formidable Great White. One more fatality later, Brody and Hooper join forces with flinty old salt Quint (Robert Shaw), the only local fisherman willing to take on a Great White--especially since the price is right. The three ride off on Quint's boat "The Orca," soon coming face to teeth with the enemy. ~ Lucia Bozzola, Rovi

The beauty of Steven Spielberg's 1975 classic is that you can choose how to watch it: as a summery, shark-bitten thriller or as an allegory about the failed leadership of institutions...

...more interesting is where the political and personal intersect... which fits nicely with what the movie as a whole does so well, mixing the horror and adventure with the personal.

Jaws is a grisly film, often ugly as sin, which achieves precisely what it set out to accomplish-scare the hell out of you.

Jaws is a splendidly shrewd cinematic equation which not only gives you one or two very nasty turns when you least expect them but, possibly more important, knows when to make you think another's coming without actually providing it.

I don't think there's a more exciting talent at work right now than Spielberg, an authentic moviemaking prodigy, and perhaps his worst problem from June 20, 1975, on will be preventing success from making a nervous or artistic wreck of him.

Perhaps the most perfectly constructed horror story in our time.

It's immortalized for good reason. Between the thematic score, its perfect cast, and gut-punch of a thrill, Jaws is still very much alive.

Jaws (1975) is a classic that defined the modern Summer Movie Blockbuster as we know it. It still plays like gangbusters and will make you deeply nervous around water.

A relatively inexperienced director Steven Spielberg found a "less is more" visual approach heightened suspense in the movie's early scenes. Characters to care about helped, along with spot-on editing by Verna Fields.

Jaws may be Steven Spielberg's greatest achievement. Sure, Schindler's List may get more critical kudos and Indiana Jones may be more iconic - but Spielberg's 1975 adaptation of Peter Benchley's aquatic thriller is a masterpiece from start to finish.

I have always been a fan of "creature features" and monster movies and Jaws is that and so much more. It is endlessly rewatchable and fun.

The father of all blockbusters, Steven Spielberg's film is a masterpiece under and above water. To this date, still makes me scared of swimming in the sea. [Full review in Spanish]

Spielberg's entrance onto the world's psyche begins with the sharing of a secret. What secret? That there's a monster out there somewhere. A big monster. Ferocious. He then allows us to frustratingly stew, ratcheting up the tension, as nobody onscreen believes it. John Williams aids considerably with his monster's theme music --- we don't have to see him to know that he's there. And so cinema itself was changed forever. Just as Psycho kept people from showering, many's the soul who avoided swimming after watching this. Maybe perfect horror.

A film that demonstrates that it is what you don't see that scares you. Roy Scheider, Richard Dreyfuss, and Robert Shaw give excellent performances. The story is compelling and the music is chillingly iconic.

Steven Spielberg's classic monster movie is a supremely accomplished slice of popular entertainment and one of my enduring favourites. His directorial expertise shines as he perfectly manipulates the mood of the film aided by John Williams' frankly perfect score. He contrasts the ferocious attacks with their broiling red stained surf and hysterical screaming with the serene peacefulness of the lapping moonlit waves from the very first scene, and uses misdirection and comic asides to engineer a tangible sense of tension as you wait for the shark to appear. Of course, the clunkily mechanical beast that completely fails to recreate the grace of the real animals is easy to criticise, but for the most part Jaws' presence is hinted at through a clever combination of first person camera work, reappearing barrels and Williams' music intercut with real shark footage and it works brilliantly. The characters are also fantastic, particularly during the bonding scene when Quint intensely recounts his experience of the USS Indianapolis, and there are so many wonderfully quotable lines I could probably recite the entire film from beginning to end. Another of the few films that I could never tire of seeing.

The classic thriller never gets old, handled superbly well in the open waters by Spielberg and carried with charisma by its lead actors. 'Jaws' will never fail to entertain, and still stands as one of the greatest thrillers of all time.