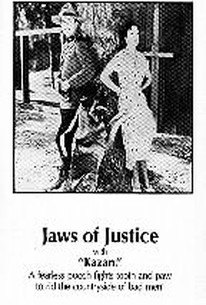 Filmed at picturesque Lake Tahoe, NV, this ultra-low-budget dog melodrama starred one of Rin-Tin-Tin's better successors, Kazan, and silent Western hero Jack Perrin, billed for unexplained reasons as "Richard Terry." The latter plays Kincaid, a Mountie coming to the aid of Judy Dean (Ruth Sullivan) and her mute friend Kickabout (Gene Toler), who are being terrorized by persons unknown because of a treasure hidden on their land. When Judy's father Seeker Dean (Lafe McKee) is murdered, Kazan) is the only one to recognize the killer, Boone Jackson (Robert Walker), a slippery stranger who masquerades as an author. Learning that the clue to the whereabouts of the treasure is to be found in the Edgar Allan Poe story The Gold Bug, Kincaid and Kickabout finally manage to convince Judy that Jackson is her enemy. The wily villain makes a quick getaway but is tracked down by Kazan. ~ Hans J. Wollstein, Rovi

Kazan the Dog
as Zazan, the dog

Starlight the Horse
as Starlight
View All

Critic Reviews for Jaws of Justice

There are no critic reviews yet for Jaws of Justice. Keep checking Rotten Tomatoes for updates!

There are no featured reviews for Jaws of Justice at this time.