Jay and Silent Bob Strike Back2001 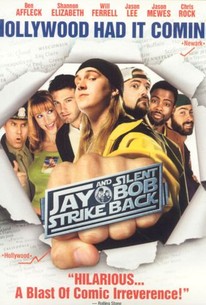 Critics Consensus: Fans can expect a good laugh as the cast from Smith's previous films reunite for Jay and Silent Bob's last bow. The loose plotting and crude language may be too much for others though.

Critics Consensus: Fans can expect a good laugh as the cast from Smith's previous films reunite for Jay and Silent Bob's last bow. The loose plotting and crude language may be too much for others though.

Critic Consensus: Fans can expect a good laugh as the cast from Smith's previous films reunite for Jay and Silent Bob's last bow. The loose plotting and crude language may be too much for others though.

Once upon a time in a galaxy very, very close to New Jersey Jay and Silent Bob stumble upon something new called the internet and discover that Miramax is making a movie about their alter-egos, "Bluntman & Chronic." In order to hang onto what tiny crumbs of credibility they have left, the dazed duo set off for California to stop the evil movie studio from making the flick. On a raucous road trip from Red Bank, New Jersey to Miramax's California studios, Jay and Silent Bob meet up with girl gangs, hitchhikers and Hollywood stars; they fall in love and watch bullets fly; they kidnap an ape and aim to take down the studio big chiefs. But most of all, they do what they do best: wreak havoc.

Will Ferrell
as Marshal Willenholly

Matt Damon
as Himself

Scott William Winters
as Himself

Shannen Doherty
as Herself

Mark Hamill
as Himself

Morris Day
as Himself

Wes Craven
as Himself

Jason Biggs
as Himself

James Van Der Beek
as Himself

Gus Van Sant
as Himself

Ever Carradine
as Jay's Mother

Steven Anthony Lawrence
as The Kid In The Helmet

Jules Asner
as Herself

Jake Richardson
as Teen No. 1

Nicholas Fehlinger
as Teen No. 2

Eric Winzenried
as Cop No. 1

Jonathan Gordon
as Cop No. 2

John Maynard
as Cop No. 3

Robert H. Holtzman
as Cop No. 4

Tom Dorfmeister
as Cop No. 5

Michelle Anne Johnson
as Hooker No. 1

Merritt Hicks
as Hooker No. 2

Alanis Morissette
as God
View All

News & Interviews for Jay and Silent Bob Strike Back

View All Jay and Silent Bob Strike Back News

Critic Reviews for Jay and Silent Bob Strike Back

Kevin Smith fans will enjoy. Not for kids.

Has the lazy, bric-a-brac atmosphere of one of those blown-off movies made during down time on some bigger affair.

Tune out the dreck and there are enough laughs for it to be worthwhile.

The perfect curtain call for these much-loved, wise but oh so stupid slackers.

A cross between a crude dumbed-down comedy and a home movie featuring a couple of dozen guest appearances by various performers and celebrities...

A great send-off for one of Hollywood's unlikeliest double acts.

Though it earns the odd chuckle on occasions, it's essentially just an elongated and largely pointless spoof movie designed only to glorify Smith's own hermetic movie-world.

A gross road film comedy that's as dim as a burnt out light bulb.

It's kind of funny, although Smith works under the assumption you've seen all his movies.

The epitome of self indulgence.

Like one massive inside joke that only regulars to the View Askew Universe will get, Jay and Silent Bob Strike Back is the ultimate measure of Smith's undeniable nerdiness.

A mess, yes, but a funny and highly enjoyable one.

Audience Reviews for Jay and Silent Bob Strike Back

It's very funny, but very silly. Anyway is terrifc see a movie to Jay and Silent Bob.

The constant sarcastic and humorous pop-culture references along with the profane dialogue is decent (and at times much). But Jay and Silent Bob Strikes Back isn't as powerful a strike as anticipated with its wildly out-of-place plot. 3.5/5

Jay: I am the master of the C.L.I.T. Remember this fucking face. Whenever you see C.L.I.T., you'll see this fucking face. I make that shit work. It does whatever the fuck I tell it to. No one rules the C.L.I.T like me. Not this little fuck, none of you little fucks out there. I AM THE C.L.I.T. COMMANDER! Remember that, commander of all C.L.I.T.s! When it comes down to business, this is what I do. I pinch it like this. OOH you little fuck. Then I rub my nose with it.  "Hollywood had it coming" Jay and Silent Bob Strike Back is one of my go to movies. No matter how many times I watch it, I still find it hilarious. The dialogue between characters is what sets Kevin Smith's comedies apart from everyone else's. No his writing is subtle or tasteful, but there's a brilliance in his jokes and their just hilarious. I don't know that there's a better movie to smoke a "J" to. The first scene of the movie may be one of my favorite comedy scenes of all time. Jay and Silent Bob find out that a movie is being made on a comic book that is based off of them. They then read online(What the fuck is the internet?) a bunch of people's opinions on Bluntman and Chronic. All of which say they are dumb characters and don't deserve a movie. Jay and Silent Bob then make their way across America to try to destroy the production of the movie. Along the way they run into Scooby's Gang, 4 sexy jewel thieves, a monkey, and a really stupid animal officer played by Will Farrell.  This movie has endless cameos including: Wes Craven, Gus Van Sant, Matt Damon, Chris Rock, and Tracey Morgan. The movie has endless lines that just beg to be re-said. In fact this may be my most quoted movie. There's just nothing not to like about Jay and Silent Bob Strike Back, in my opinion. Now I know that the content isn't for everyone. There are people out there that shouldn't watch this because they will be terribly offended. Grandparents for one, shouldn't watch Jay and Silent Bob. Some of the content could kill them.  What's really cool about this film from Kevin Smith is that it is a parody of the same movie we are watching. I don't know if I've ever seen another movie parody itself, but it works here. It also helps if you are familiar with Smith's other works because they are referenced a lot. Still, if this was the first Smith film you ever watch, you could still enjoy it.  Jay: [singing] Fuck, fuck, fuck, fuck, / Mother, mother fuck, / Mother, mother fuck, fuck / Mother fuck, mother fuck, / Noise noise noise, / 1, 2, 1, 2, 3, 4, / Noise, noise noise / Smokin' weed, smokin' wizz, / Doin' coke, drinkin' beers, / Drinkin' beers, beers, beers, / Rollin' fattys, smokin' blunts, / Who smokes the blunts? / We smoke the blunts. / Rollin' blunts and smokin'...  Teen #2: Uh, let me get a nickel bag.  Jay: [singing] / Fifteen bucks, little man, / Put that shit in my hand, / If that money doesn't show, / Then you owe me, owe me, owe, / My jungle love, yeah, / Owe-ee, owe-ee, owe, / I think I want to know ya, know ya, / Yeah, what?

Jay and Silent Bob Strike Back is a fun comedy that will appeal to Kevin Smith fans. This film was my first experience with the Jay and Silent Bob characters, as I never had seen a Kevin Smith film before. I quite enjoyed the film, the crude humor was good, and the plot was interesting as well. The cast did a good job here as well, and there were plenty of memorable funny performances. This is a good film, but compared to other films that Kevin Smith has made, it's not as memorable. I liked the film, but it did lack at times. The film works well enough to be a good comedy, but it's far from others like Clerks or Dogma, which were superior. Though this isn't among Kevin Smith's best films, this is still a film worth seeing. The cast that Smith has assembled here is good to watch on-screen, and they each bring something unique to the film. The film did have so much potential of being better than what it turned out to be. The film is entertaining and fun and delivers the laughs, but overall I felt that it could have been much better as well. This is a film worth watching if you're a Kevin Smith fan, and en joy his brand of comedy. But as a whole, Smith has made far better films than this. But for what it's worth, this is a mindless comedy that you need to shut your brain off to enjoy. Don't search for logic in the script, as you find it. This is simply put a good comical endeavor that despite its flaws, is still worth checking out. I liked the film, and though Smith has made better flicks, Jay and Silent Bob Strikes Back is fun, and in the end mindless entertainment is good enough for me.