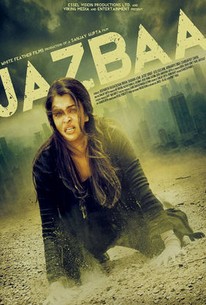 Prominent criminal lawyer Anuradha Verma's daughter is abducted, and the abductor informs her that the only way she will ever see her daughter again is by defending a convicted felon, charged with brutally raping and murdering a young woman. The abductor watches Anuradha's every move, forces her to comply and orchestrates a perfect crime by outwitting the police. Anuradha's friend Yohan, a suspended policeman with disregard for old rules, is too tangled up in his own mess to help her. The prosecutor is a longtime rival who is determined to defeat Anuradha professionally. Anuradha has only seven days before the trial ends and race against time and corruption to save her daughter.

Aishwarya Rai-Bachchan makes a disappointing comeback in a dull thriller.

South Korean cinema should be protesting. In his obsession with remaking Korean films in Hindi, Sanjay Gupta continues to make a hash of them.

For all the rot Gupta dwells on, there's something refreshing about Jazbaa within the wider Bollywood context: it'll make for brisk, pacy, adult entertainment - whichever side of the law you're on.

By itself, Jazbaa is not a bad film. It's just really badly made. It is treated as more of an occasion than a film, more of a comeback vehicle than a kidnap drama

The wicked climax of Jazbaa makes it a satisfying watch, but not a watertight thriller.

The fast paced Jazbaa is entertaining but no where near as compelling as it should have been.

Watch the film if you're an Aishwarya Rai fan.

Jazbaa roots its pulpy premise in the rising spate of crimes against women, but there is never any danger of taking a movie too seriously if it bathes its characters in jaundice-yellow light and re-imagines the colour of the sky as swamp-green.

Another flashy but torpid remake of a Korean thriller from Sanjay Gupta.

Watch this if you must for Aishwarya Rai Bachchan who's still in top form. Pity her comeback film doesn't measure up to her efforts.

Jazbaa is a film which thrives on style

There are no featured audience reviews yet. Click the link below to see what others say about Jazbaa!