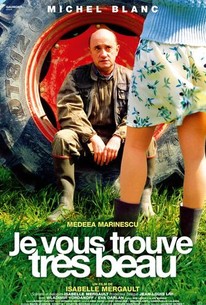 Michel Blanc stars as Aymé, a grumpy recently widowed farmer, in writer/actress Isabelle Mergault's directorial debut, the romantic comedy You Are So Handsome. When Aymé's work partner and wife dies suddenly in an unfortunate accident, he quickly realizes that he needs someone around to help him with the womanly half of the chores. An unsentimental sort, within days he's contacted a service to find him a new wife. This brings him to Romania, where he's introduced to a lot of much younger women, most of whom take the wrong tack, dressing skimpily and telling Aymé how handsome he is. Elena (Medeea Marinescu), a single mother, is as eager to move to France and make some money as the next girl, but she takes the time to assess the situation, puts on a sweater, and tells Aymé, in her charmingly broken French, how much she's always wanted to live on a farm and work with animals. Her strategy works, and Aymé decides to bring her back to France, but, embarrassed about what he's done, he comes up with a lame cover story to fool his best friend, Roland (Wladimir Yordanoff), and the rest of his neighbors. He tells them she's a distant relative who's visiting the farm as an "intern," and has Elena pretend that she speaks no French at all. Elena expects them to have a real marriage, and is disappointed when she realizes that Aymé just wants her to work. Eventually, Aymé realizes his feelings for Elena go deeper than expected, but by then, her frustration and homesickness are becoming too much to bear. You Are So Handsome was shown as part of The Film Society of Lincoln Center's Rendez-Vous with French Cinema in 2006.

There are no critic reviews yet for Je Vous Trouve Très Beau. Keep checking Rotten Tomatoes for updates!

A lovely little gem of French B-cinema. Not as playful as other French movies, but full of charm and subtle, refreshingly un-Hollywood humour. A movie about a simple farmer looking for love via a marriage agency. The movie has its odd cheesy moment, but the natural and unglossy actors balance out the rom-com plot elements, Nice detour from mainstream comedy. HX