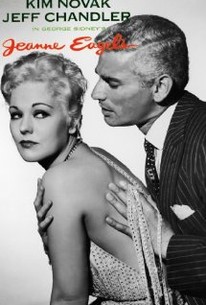 Kim Novak is clearly out of her depth as legendary Broadway actress Jeanne Eagels, but one can't fault her for trying very hard. As this filmed biography gets under way, wide-eyed Eagels finds herself stranded in a tank town by a smooth-talking traveling salesman. Carnival operator Sal Satori hires Eagels as a kootch dancer, but her ambition is to become a serious dramatic actress. When she and Sal reach New York, she signs up for acting lessons under the tutelage of a Mme. Neilson (Agnes Moorehead). Before long, Jeanne is understudying on Broadway, and in 1922 she takes audiences and critics by storm with her unforgettable portrayal of Sadie Thompson in Rain, a role she landed by ruthlessly double-crossing the actress originally slated for the part (Virginia Grey). When her rival commits suicide, the chastened Jeanne turns to booze and drugs to assuage her conscience. The real-life Jeanne Eagels died of narcotics addiction in 1929, a fact that the Hollywood version skims over. Eagels' family sued Columbia Pictures over the "distortions" offered in Jeanne Eagels. ~ Hal Erickson, Rovi

Gene Lockhart
as Equity Board President

Will Wright
as Marshal

Hellen Van Tuyl
as Great Lady on Equity Board

Brad Jackson
as Young Man on Equity Board

Lillian Culver
as Equity Board woman

Helen Van Tuyl
as Great Lady on Equity Board

Lee Trent
as Leading Man on Equity Board

Jack Ano
as Soldier
View All

There are no featured reviews for Jeanne Eagels at this time.