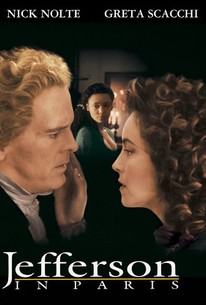 This historical drama takes place during future American president Thomas Jefferson's term as an ambassador in Paris, in the years preceding the French Revolution. Much attention is paid to Jefferson's private life, particularly his affair with young slave Sally Hemmings (a detail felt by many critics to be historically inaccurate).

Catherine Chevalier
as Lady in Court

Laure Killing
as Lady in Court

Damien Groelle
as The Dauphin

Felix Malinbaum
as Captain of the Guard

Nancy Marchand
as The Abbess

Gabrielle Islwyn
as Singer with Megaphone

Tim Choate
as Reporter
View All

Critic Reviews for Jefferson in Paris

There's no moment in Jefferson in Paris when you can feel why the filmmakers had to tell this story. All dressed up, this elegant movie has nowhere to go.

What is it about? Revolution? History? Slavery? Romance? No doubt a lot of research and speculation went into Jhabvala's screenplay, but I wish she had finally decided to jump one way or the other. The movie tells no clear story and has no clear ideas.

Aka the affairs of Jefferson. Handsome production.

Good idea, but Nolte is not believable as Jefferson.

Contains ample pleasures for those who appreciate subtlety and sophistication in their movie fare.

Audience Reviews for Jefferson in Paris

A bunch of supposition unsupported by the known facts but a handsome production, if a bit overlong. Jefferson's daughter Martha Jefferson Randolph, by all reports a vivacious charming girl, is done an injustice by way of the sulky, petulant flat performance Paltrow gives of her.