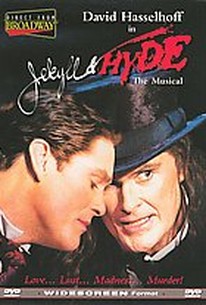 Robert Louis Stevensonâ's classic story of the epic battle between good and evil, as imagined by acclaimed composer Frank Wildhorn and writer/lyricist Leslie Bricusse. David Hasselhoff made his Broadway debut in the dual title role, bringing his performing talent off the television screen to the musical theatre stage. As the longest-running show in the history of Broadway's Plymouth Theatre, the show has won a legion of repeat visitors, dubbed by the press as "Jekkies", with some hardcore fans having seen the show hundreds of times. Featuring song contributions from: The Moody Blues, Liza Minnelli and Johnny Mathis; including "Someone Like You", "This Is The Moment" and "Once Upon A Dream." Captured in brilliant high definition.

There are no critic reviews yet for Jekyll & Hyde: The Musical. Keep checking Rotten Tomatoes for updates!

There are no featured audience reviews yet. Click the link below to see what others say about Jekyll & Hyde: The Musical!