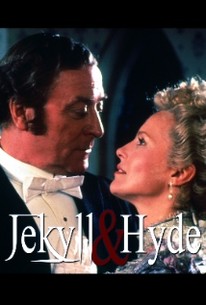 In assembling the 1990 TV-movie version of Jekyll and Hyde, writer/director David Wickes recycled many of the elements of his 1988 adaptation of Jack the Ripper--including props, costumes, sets, and star Michael Caine. Caine goes through the standard motions as kindly Henry Jekyll, who dabbles where Men Must Not and unleashes his beastly alter ego Mr. Hyde. Anything new here? Well, the character of Dr. Lanyon, Jekyll's best friend in the original Robert Louis Stevenson story, has been rewritten as his worst enemy. Joss Ackland plays the vitriolic Lanyon, while Cheryl Ladd shows up as a newly fabricated love interest. Jekyll and Hyde has some neat makeup transformations, but otherwise is just the same old cloak 'n' fang jazz seen in so many earlier incarnations of the venerable Stevenson yarn.

Justin Degan
as Newsboy
View All

There are no critic reviews yet for Jekyll & Hyde. Keep checking Rotten Tomatoes for updates!