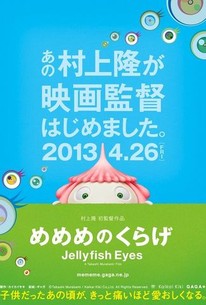 The directorial debut from acclaimed artist Takashi Murakami, Jellyfish Eyes brings its creator's endless imagination to the screen in a tale of family, friendship, and loyalty set in a world of fantasy that only Murakami could conjure. Having moved to the country with his mother following the death of his father, young Masashi (Takuto Sueoka) immediately makes a most unlikely friend: a flying, jellyfish-like sprite that he nicknames Kurage-bo. Taking Kurage-bo under his wing and into the classroom, Masashi soon discovers that his schoolmates have similar friends - and that they, their creators, and the town itself are not all they seem to be. Pointedly set in a post-Fukushima world, Murakami's film carries a message of cooperation and hope while boasting unforgettable creature designs and handmade special effects nearly a decade in the making. A touching triumph of creativity and wonder, Jellyfish Eyes is a must-see for film lovers of all ages. (C) Janus

Though it may amuse hardcore devotees of kaiju film on video, the film hardly threatens to make Murakami the next Julian Schnabel.

[The] story [is] barely original or interesting enough to sustain a half hour of kids' TV.

Whatever you might think of Mr. Murakami's paintings and sculptures, they are invariably polished and eerily perfect, but his movie seems thrown together.

Watching unmemorable child protagonists repeatedly fight and bond with each other and a bunch of F.R.I.E.N.D.s, tacky-looking Pokémon-esque monsters, is unproductively exhausting.

Takashi Murakami has invested the film with the same sort of primal pop-art aesthetic that distinguishes much of his art.

The creatures -- which range from a human-sized frog to a sprite with a big metal box for a head -- provide a worthy showcase for Murakami's prodigious visual imagination.

Jellyfish Eyes is sure to have its fans. But those who tire easily of twee children and their fantastical toys may find Murakami's debut a bit cloying, and perhaps a bit too representative of his superflat technique.

Jellyfish Eyes is a film chiefly addressed to children, but its visuals and twists make it a worthwhile spectacle for adults also.

The fantastical creatures Murakami designed for the film are its real stars. And in spite of the superflat format, he manages to address some deep-seated fears and traumas in what might otherwise feel like a by-the-numbers kids' movie.

Unfortunately, a narrative feature film is more than just moving images, and once Murakami dives into narrative and character, Jellyfish Eyes begins stumbling all over itself

Whatever theories Murakami has perfected in his visual art, he's miscalculated in his feature-filmmaking dabble.

There are no featured audience reviews yet. Click the link below to see what others say about Jellyfish Eyes!