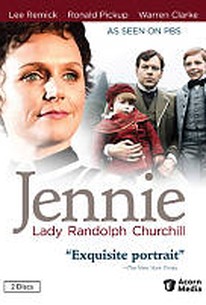 There are no critic reviews yet for Jennie: Lady Randolph Churchill. Keep checking Rotten Tomatoes for updates!

There are some good supporting performances here but the whole enterprise rests on Lee Remick's portrayal of the title character and she delivers in spades. Her Jenny is by turns funny, haughty, wise, flighty, maternal, selfish, giving and always beautiful. She takes us along from her youth to old age and by the end you feel you know this woman and are glad of it. The set and costume designs are expertly done and lend a real sense of the period. For history buffs a worthwhile viewing experience with the bonus of not only a top flight actress but one that provides movie star glamour to boot.