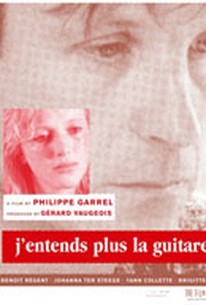 As a young man, Gerard was in a relationship with Marianne, a woman he called the love of his life, someone he would love even beyond the veils of death. However, somehow he drifted out of his relationship with her, though they were occasionally in touch with one another. Many relationships later, he is now married and has children by a wonderfully solid and nurturing woman (whom he is not faithful to). When he hears of the death of his first love, it causes him to reevaluate his relationships, and he realizes that Marianne was indeed the one great love of his life. Only his own lack of a real center caused him to lose that precious relationship. ~ Clarke Fountain, Rovi

Philippe Morier-Genoud
as The Stepbrother

Edith Boulogne
as The Grandmother

Leaping effortlessly, audaciously ahead in time, the fractured form embodies Garrel's themes: the speed of life passing, the inescapable burden of memory.

Raw, rueful, and piercingly alert, a film of tremendous formal instinct and cogent human truth, J'entends is an oblique memoir of the filmmaker's relationship to Nico (Steege) -- and a testament to the elusive genius of a postwar French master.

Garrel's nakedly personal disappointment bleeds into an unsentimental elegy for an elegantly wasted generation. Instead of shallow self-pity, he gives us a melancholy deep enough to drown in.

Garrel buffs, of which there are many, won't want to miss this one. Other viewers should decide based on their tolerance for talky, contemplative but rewarding cinema.

Like the ghostly music its title evokes, this film's meanings are both elusive and haunting.

A film that purposefully avoids plot and character conventions, that will transport some viewers into a reverie and drive others to boredom and befuddlement.

Moments of raw intimacy like this make it particularly painful to watch as the film lurches/slouches to its inevitably tragic conclusion.

a dark and devastating romance

"I Can No Longer Hear the Guitar" is a dreary movie about the on-again, off-again relationship between Gerard(Benoit Regent) and Marianne(Johanna ter Steege) that is off when she becomes jealous over Lola(Mireille Perrier), the girlfriend of his friend Martin(Yann Collette). The movie succeeds very well at making the viewer as miserable as the characters while making it impossible to get any grasp on who they really are without any context. The jump cutting certainly does not help. Details about Marianne come and go. For example, it is established at one point that she is a single mother and then it is never brought up again. Later, heroin is entered into the volatile mix with a more lasting effect.

This board looks lonely. Be the first to talk about "I Can No Longer Hear the Guitar (J'entends Plus La Guitare)" !