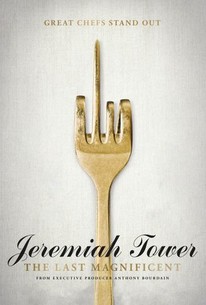 Critics Consensus: Jeremiah Tower: The Last Magnificent serves up a smorgasbord of documentary delights for foodie film fans -- and it's a pretty good watch for non-enthusiasts too.

Critics Consensus: Jeremiah Tower: The Last Magnificent serves up a smorgasbord of documentary delights for foodie film fans -- and it's a pretty good watch for non-enthusiasts too.

Critic Consensus: Jeremiah Tower: The Last Magnificent serves up a smorgasbord of documentary delights for foodie film fans -- and it's a pretty good watch for non-enthusiasts too.

JEREMIAH TOWER: THE LAST MAGNIFICENT explores the remarkable life of Jeremiah Tower, one of the most controversial and influential figures in the history of American gastronomy. Tower began his career at the renowned Chez Panisse in Berkeley in 1972, becoming a pioneering figure in the emerging California cuisine movement. After leaving Chez Panisse, due in part to a famously contentious relationship with founder Alice Waters, Tower went on to launch his own legendary Stars Restaurant in San Francisco. Stars was an overnight sensation and soon became one of America's top-grossing U.S. restaurants. After several years, Tower mysteriously walked away from Stars and then disappeared from the scene for nearly two decades, only to resurface in the most unlikely of places: New York City's fabled but troubled Tavern on the Green. There, he launched a journey of self-discovery familiar to anyone who has ever imagined themselves to be an artist. Featuring interviews by Mario Batali, Anthony Bourdain, Ruth Reichl and Martha Stewart, this delicious documentary tells the story of the rise and fall of America's first celebrity chef, whose brash personality and culinary genius has made him a living legend.

Lost City of Z and Fargo Season 3 Are Certified Fresh

Though you may be tempted, do not run screaming from "Jeremiah Tower: The Last Magnificent" after the first two minutes.

Like his restaurants, the film is carried by Tower's personality and vision. Even if you're not into food, it's a fascinating look at a seminal moment in American cuisine, and the man who helped bring it about.

The Tavern footage is terrific stuff - unstaged and unmediated and the closest the camera gets to penetrating the enigmatic yet magnetic chef.

Lydia Tenaglia's alternately dreamy and gossipy documentary about celebrity chef Jeremiah Tower is heavy on the "celebrity" and frustratingly short on the "chef."

An oddly compelling documentary that sheds light on an important - albeit forgotten - cornerstone of modern, contemporary cuisine.

It's a reminder, not so gentle, that even the most well known celebrities are human beings.

Above all else, The Last Magnificent captures the passion with which Tower operates every corner of his life, even when he's mostly sitting still.

Other than in the broadest possible terms, I'm not sure we're given a clear sense of what makes Tower tick... But the movie is still watchable and amusing.

It didn't give me a ton of new insight into the culinary world but was interesting.

Tower is portrayed as a solitary figure who has never recovered from the isolation of his early, formative years.

There are no featured reviews for Jeremiah Tower: The Last Magnificent at this time.