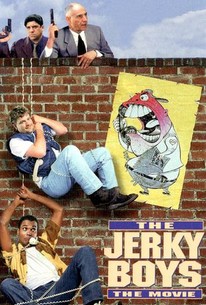 Two "low-lifes from Queens" find themselves involved with the mob and the police after making a series of prank phone calls in this comedy which is based on the work of Johnny Brennan and Kamal Ahmed who currently have two hit comedy albums. In the film two comedians, both in their '30s, essentially play themselves.The story opens as the two chronically-unemployed-and-proud-of-it guys make a series of prank phone calls. The Jerky Boys decide to call a local Mafioso after they become irritated with the bragging of an old high school chum who works with the local mob. Just for yuks, Johnny calls and claims to be a famed Chicago hitman on the lam with his buddy. They are believed and subsequently taken to a night club to listen to Tom Jones perform. The boss is not fooled by the boys' antics. Unfortunately, a local cop is fooled and believes the Jerky Boys are really on the run. If he can catch them, they might lead him to the head honcho in Chicago.

Johnny Brennan
as Himself

Kamal Ahmed
as Himself

Tom Jones
as Himself

Suzanne Shepherd
as Mrs. B.

Henry Bogdan
as Member of Helmet

Rob Echeverria
as Member of Helmet

John Stanier
as Member of Helmet

John Norman Thomas
as The Cabbie

Maria A. Corbo
as Newswoman

Christopher Harrison
as Sparky the Clown

Critic Reviews for The Jerky Boys

While not intended for those effete sophisticates whose idea of film is a Merchant-Ivory classic, this first movie for Johnny Brennan and Kamal proves fitfully funny as the boys bumble along with their low '90s humor.

The lame duo truly come off looking (as is repeatedly said in the film) like 'two low-lifes from Queens.' (published 2-17-95)

Audience Reviews for The Jerky Boys