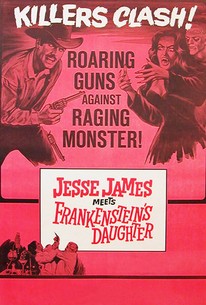 William "One Shot" Beaudine's companion piece to the equally nonsensical Billy the Kid vs. Dracula represents a memorable closing to the eccentric "Z"-movie auteur's amusing body of work. The hare-brained concept finds the legendary outlaw Jesse James (John Lupton) stumbling into the decrepit lair of Maria Frankenstein (Narda Onyx) -- not the daughter but the granddaughter of the infamous monster-making Baron. Maria is, of course, following in Grandpa's footsteps by creating a creature of her own, transplanting the dormant but still-intact brain of Frankenstein's original monster into the body of one of James' cohorts. The lumbering, homicidal monster -- imaginatively dubbed "Igor" -- begins terrorizing townsfolk until the inevitable showdown between living and undead gunslingers. Though not as flamboyantly awful as its predecessor (mainly due to the absence of John Carradine), this is still worth a look for trash-movie completists.

William Fawcett
as Jensen the Pharmacist

Paced like the slow bloating of a dead rat on the highway.

For those who pine for bad illogical camp films, this one is more than inviting.

Loopy bottom-of-the-barrel companion piece to Billy the Kid vs. Dracula.

As lame as it sounds.