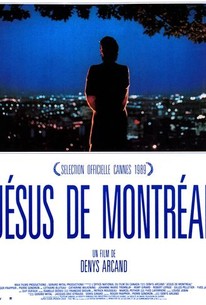 A modern-day Passion Play becomes a reenactment of the life and death of Jesus Christ in more ways than one with this critically acclaimed drama from Quebec filmmaker Denys Arcand. Lothaire Bluteau stars as Daniel Coloumbe, an intense young actor in Montreal who is hired by church fathers to restage and update the city's annual Passion Play, which over the course of the past 40 years has begun to seem hidebound. Daniel hires a group of struggling young actors that become devoted to him and his creative vision as he devises an extremely avant-garde production that takes Christ's rebellious teachings literally. Revolving around set pieces reflecting passages from Christ's life rather than a traditional re-creation of events, Daniel's revisionist work also incorporates blasphemous ideas about his subject, questioning his true nature. Daniel's play is a critical smash and wows mesmerized audiences, but greatly disturbed church officials order the labor of love dismantled. Real life begins imitating biblical events as the actors become cast-outs and Daniel smashes up an audition in which the actress portraying his Mary Magdalene (Catherine Wilkening) is asked to disrobe by a prurient producer.

Denys Arcand
as The Judge

It's an original and uncompromising attempt to explore what really might happen, if the spirit of Jesus were to walk among us in these timid and materialistic times.

Denys Arcand made this original movie, in which life imitates art, at the peak of his career, right after Decline of the American Empire.

Inventive, witty, illuminating: about a contemporary staging of the Passion play, the institutional church's reverence for the status quo, & the false gods of secularism.

My very first of a lot of things. My first indie. My first foray into Quebecois film. My first look at a Denys Arcand film..and the first time seeing the multitalented Robert Lepage. There is not surprise that many of the alumni of this production went on to succesful careers. It is a great film.

The movie has some good points: that consumerism, materialism, are hedonism are empty lifestyles. Pop culture... (wealth, sex, the media) is worshipped like a god. The major problem with this movie is the portrayal of Christ. He is the Son of God... the Savior of the world. He was portrayed in this movie as just another man.

I liked the first half of this, but by the end it was just too much, and getting too obvious. The clever, calling-of-the-disciples allusion is my favorite, and the play itself is rather absorbing.